FASHIONCLASH presented with Fashion My Religion! the 10-year anniversary edition of the international and interdisciplinary FASHIONCLASH Festival in Maastricht, Netherlands. During the 15th, 16th and 17th of June 2018 more than 150 promising designers and stage performers from countries such as the Netherlands, Germany, Italy, Portugal, Serbia, Finland, Uruguay and many more where given the stage at the festival. The festival program was composed within a 3-day program The Route: an inspiring pilgrimage along 26 locations with expositions, theatre- and dance performances and talks.

Several projects during where specially initiated the festival, for example the God Is A Woman!? for which ten designers where invited to create an outfit that is based on research on a subject that is related to the theme ‘Fashion My Religion, focussing on the research on social intolerances exist and how fashion can play a role in creating more inclusivity.

The festival opened in the Gashouder on Friday June 15. Not only was there pie but also the campaign cakes from Das Leben am Haverkamp could be admired from up close. The opening guests could choose from four routes: Museum, Church, City and Sally. Each route consisted of a number of elements from the program such as the Koorkappen exhibition in the Bonnefantenmuseum, dance performance LUX by Sally Dance Company in the Brandweer, Babel collection installation by Kasper Jongejan, Showpieces exhibition in the Bijenkorf, Inspired by Religion exhibition in ‘t Dinghuis, installation of Amber Jae Slooten in Entre Deux and Day Dream Space installation / performance by Tim Scheffer and Audrey Apers in Centre Ceramique.

On Friday, a rather controversial and much-discussed pink church was literally blown up at the historic square the Vrijthof, where a themed program was organized with a number of speakers in collaboration with Waardengedreven. The Pink Church got a lot of attention and while the churches in the Netherlands are getting empty, the pink church was packed with fashionable guests.

The Fashion Show program with more than 30 designers and 12 MAFAD graduates took place on Saturday evening, a spectacular evening in a setting designed by Studio AKATAK and Scott Robin Jun. There were many highlights such as Carlijn Veuring, Annaïss Yucra Mancilla, Daria D’Ambrosio, Jacqueline Loekito, SorteMaria, Teun Seuren, Matteo Carlomusto and Zahra Hosseini.

During the show program the impressive LUX was presented, the dance performance of Sally Dance Company, tenth edition of the CLASH Project and Noumenon performance by Mami Izumi and Jivika Biervliet.

After the shows four Awards were presented. And the winners are:

On Sunday there was a program in the LAB Building / Forza Fashion House with three performances and The Fashion Dialogue: a CLASH or VALUES, a talk organized in collaboration with MIND FASHION with special speakers Maaike de Haardt, Dai Rees, José Teunissen, Ben Wubs, Adam Peacock and Mariangela Lavanga.

The tenth edition was one with many clashes with which the FASHIONCLASH platform gave stage to the experiment that goes beyond fashion. The festival presented a series of theme related theater and dance crossovers, including the performance ‘HUNTING’ by Nora Ramakers and Timo Tembuyser, a co-production with VIA ZUID, ORACLES by Anna Luka da Silva and Erik van de Wijdeven and ‘MISSA HOMO SACER Op. 35 Confiteor Deo’ by Timo Tembuyser.

At the Mosae Forum shopping center, a special project was presented, called Dialoque Between Fashion and Death by Nina Willems, who collaborated with fashion designer Marlou Breuls and director Eva Line de Boer, based on the romantic poem by Giacomo Leopardi. At Lumière Cinema the performance took place ‘I Am Sad’, a project by Margreet Sweerts that showed the research of the project Festival of Sadness that will take place in the autumn. One of the festival highlights was LUX, the dance performance of SALLY Dance Company Maastricht. A choreography by Martin Harriague in collaboration with Maastricht fashion designer Mieke Kockelkorn, inspired by the written word in religion.
And last but not least, the number of talented students from Academy of the performing Arts Maastricht who presented their performances, including Anthony van Gog, Timo Tembuyser, Anna Luka da Silva and Kimberly Afua Agyarko.

The overarching theme Fashion My Religion! boldly dove into one of the most current themes of the moment; religion. Specifically, the relation between religion and gender, hair style and clothing. FASHIONCLASH challenged participants and visitors to research, highlight or break existing religious traditions and taboos by way of using fashion. A call to activism that hopefully inspires a new generation of fashion- makers and lovers to fulfil their role as meaningful as they can.

‘’The meeting between fashion and religion isn’t a new one. Religious idioms and luxury have been used for decades by many within fashion. Sometimes just for ethical motives, other times with a dose of criticism. With ‘Fashion My Religion’ we are placing the audience and the designer in an interesting area of tension; fashion versus religion or cutting-edge versus tradition. We take a closer look at cultural expressions of personal, modern meaning and more traditional ones. We place historical absolutes opposite from modern-day fluid truths by really going in on social matters such as, feminism and human rights. Through (fashion)design we dissect the ever-changing awareness around the relationship we have with our environment and come up with new stories and approaches to ‘fashion and religion’.

Inflating the pink church on the Vrijthof, the Koorkappen project in collaboration with Heiligdomsvaart and projects like God is a Woman! were just few examples of this clash. 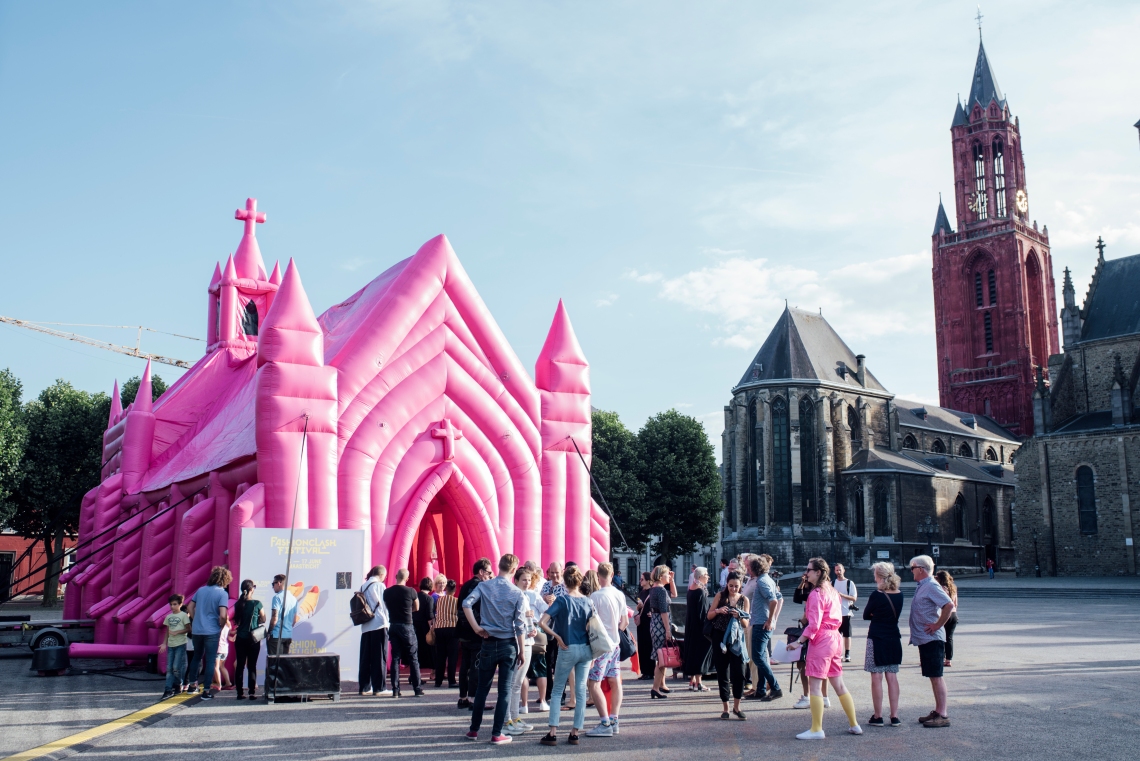