The 12th edition of Feeric Fashion Week turned  Sibiu again into the world’s capital of creative fashion. Between 17 and 21 July, designers from all corners of the world presented their new collections in unconventional spaces in the city and in Sibiu County, Transylvania, Romania. Because fashion is among the polluting industries, this year’s Feeric Fashion Week is taking another important step towards international recognition, aligning itself with the global pollution reduction trend.

“Some voices position fashion in the second-place among the most polluting industries. Non-profit organizations, as well as corporations, invest heavily in awareness campaigns and even in research to reduce pollution. More and more independent designers are thinking about new collections in line with the awareness messages both from the market and from the big players in fashion industry “says Mitichi, president of Feeric Fashion Week.

Feeric Fashion Week is rightly credited with the recognition of the most creative fashion week in the world due to the absolutely unconventional fashion presentations they made, not once, well known around the world. Designers from all corners of the world choose to value their new creations in atypical spaces for fashion presentations. On the water, inside the water, in the lion’s cage at the zoo or in the middle of a stone quarry, the Feeric Fashion Week presentations are a standard of world-class creativity.

On Friday, July 18, Feeric Fashion Week had risen to heaven.

At 13 o’clock on the luggage lane of the Arrivals terminal at Sibiu International Airport, PIF STEPHANO showcased his Spring/Summer 2020 collection, MONOLOG 20.19. Pif Stephano, graduated at the Faculty of Arts and Design in Timişoara, Romania, and the 2018 promotion marked its first year of activity, achieving a number of notable results, appearances in the national and international specialized press, and presented on national and international scenes in the context of Arts of Fashion Competition in San Francisco, Feeric 33 competition in Sibiu and International Youngs Designer Contest in Kiev.

Primordial moral rules, standards, or values coordinate the perception of the individual in space and time. Race, gender, or sex still stir up opposition amongst populations and become tense subjects that cause effects such as hate, prejudice or discrimination. In the twenty-first century, the conservative spiritual consciousness manifests itself naturally against the modern-liberal spirit. And once again, taboo aspects became open discussion topics. Aesthetically and structurally, MONOLOG 20.19 wishes to combat the pink – it “a girl”. Or not! Thus, the designer proposes an aesthetic represented by a socio-cultural hybrid of the present. 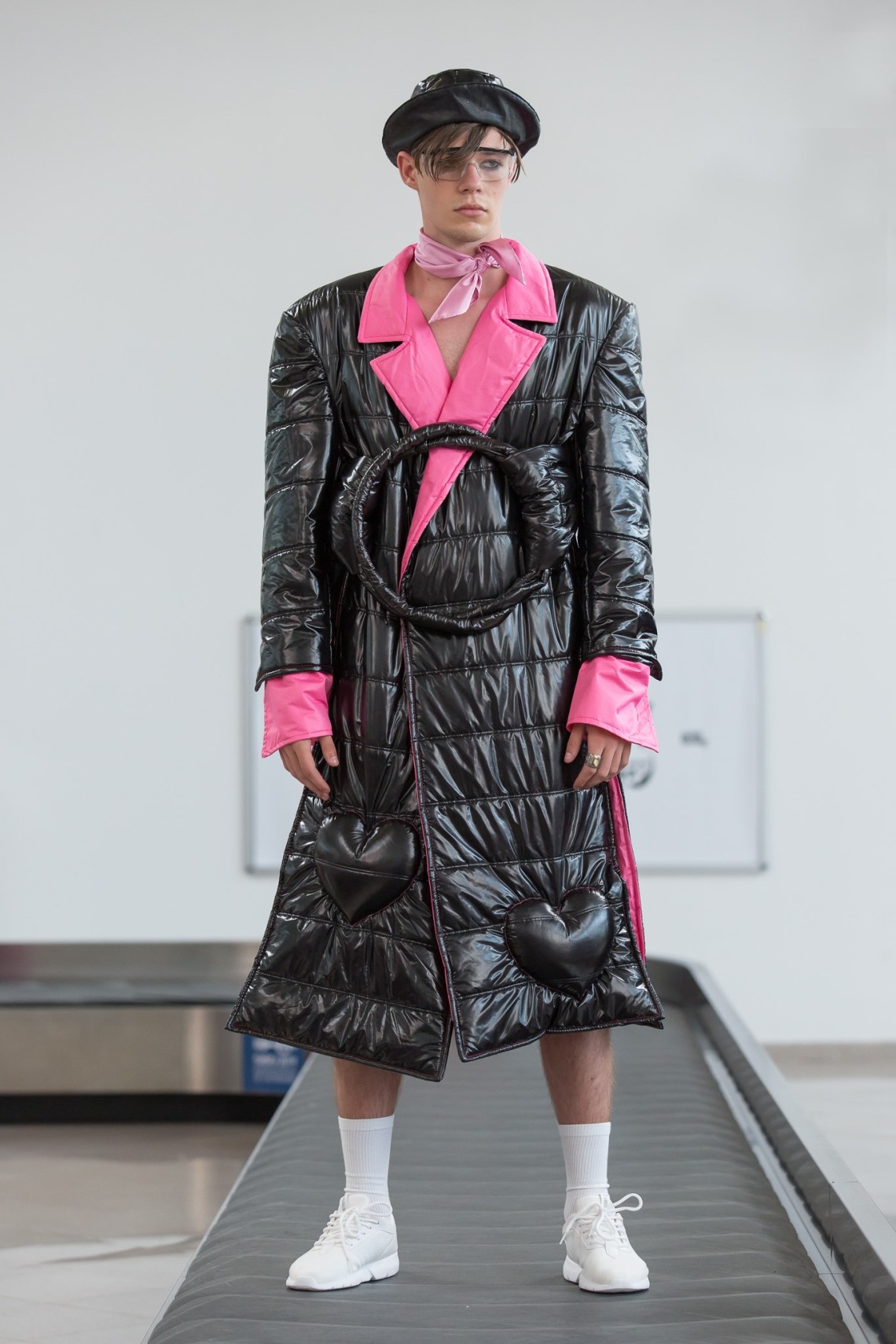 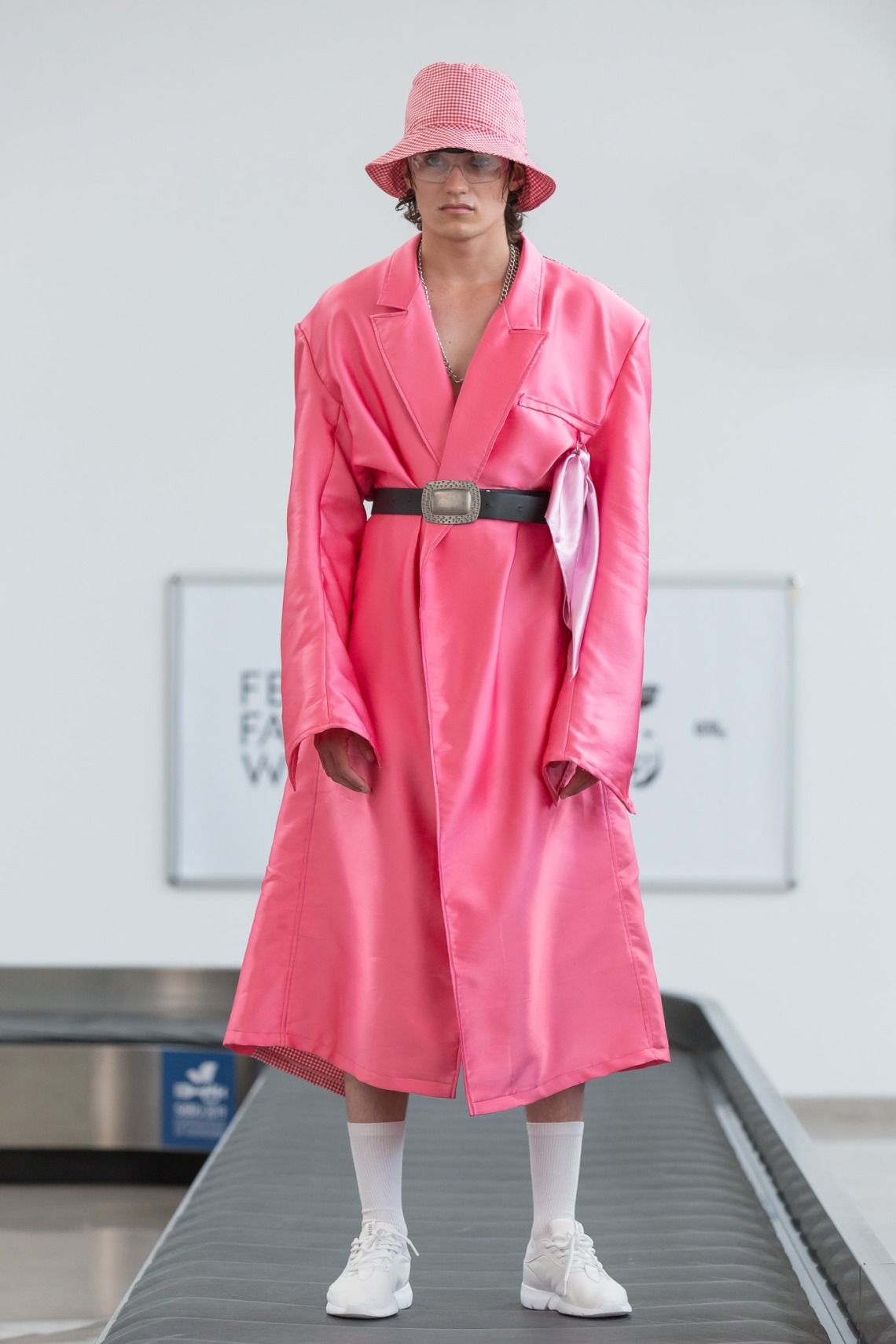 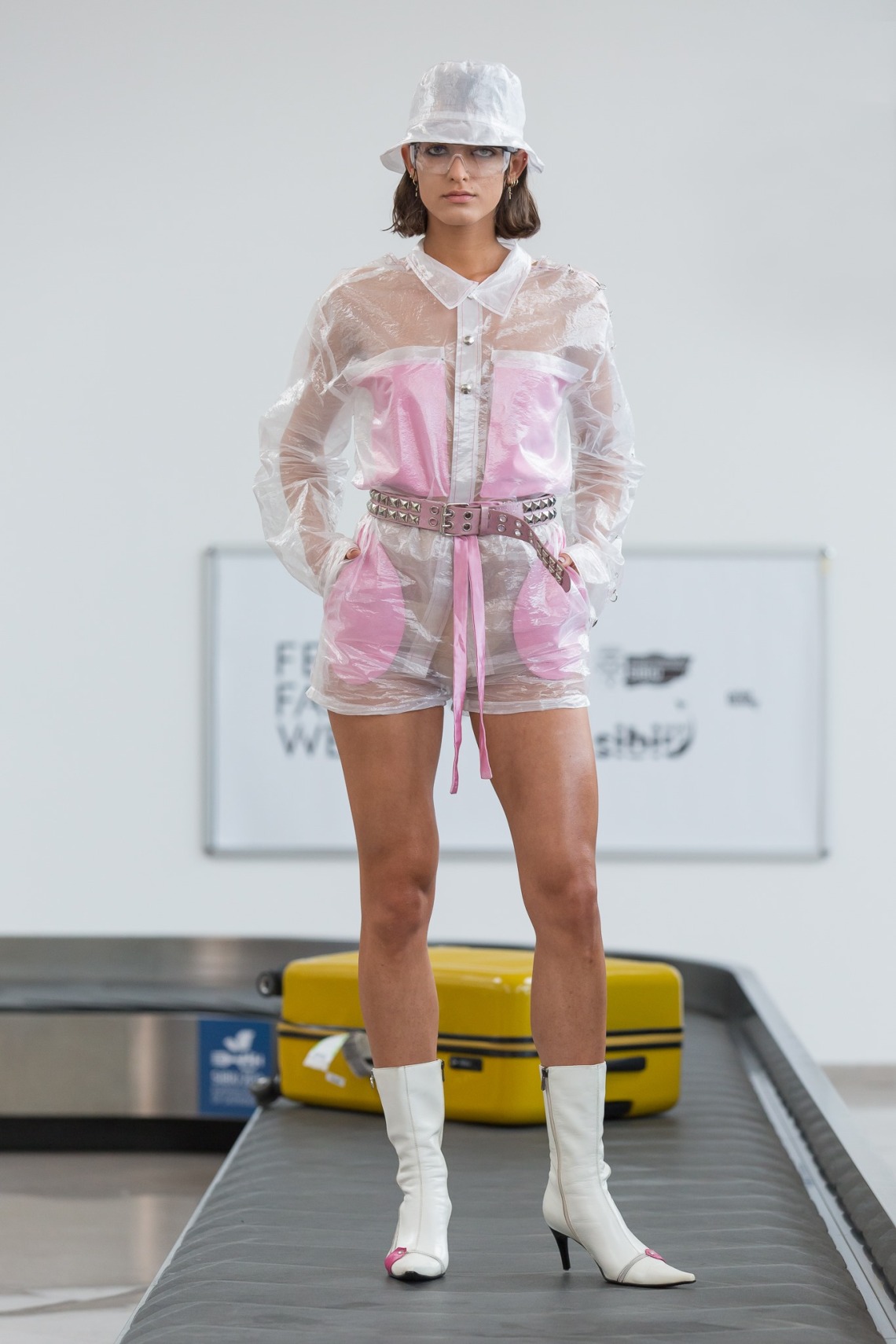 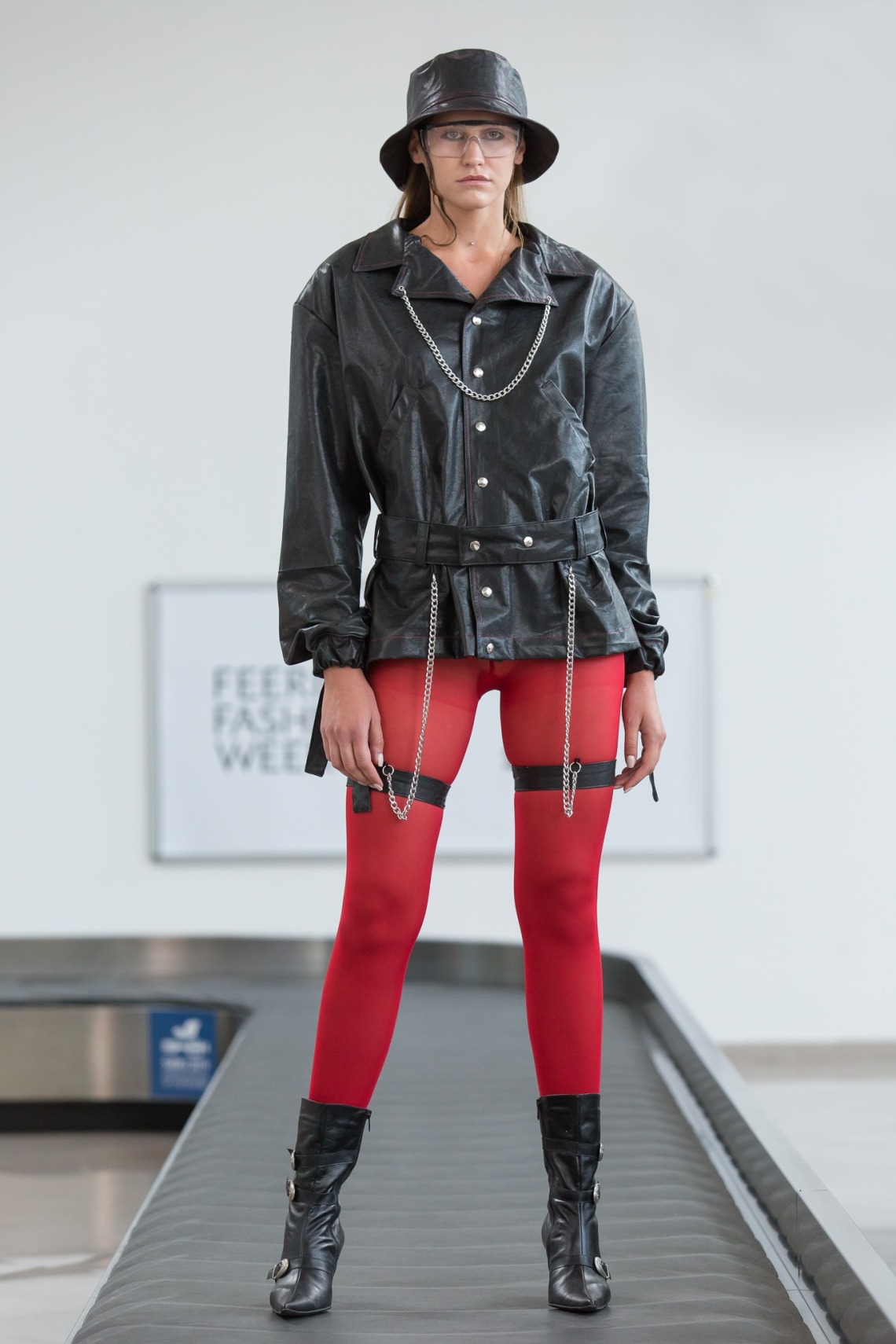 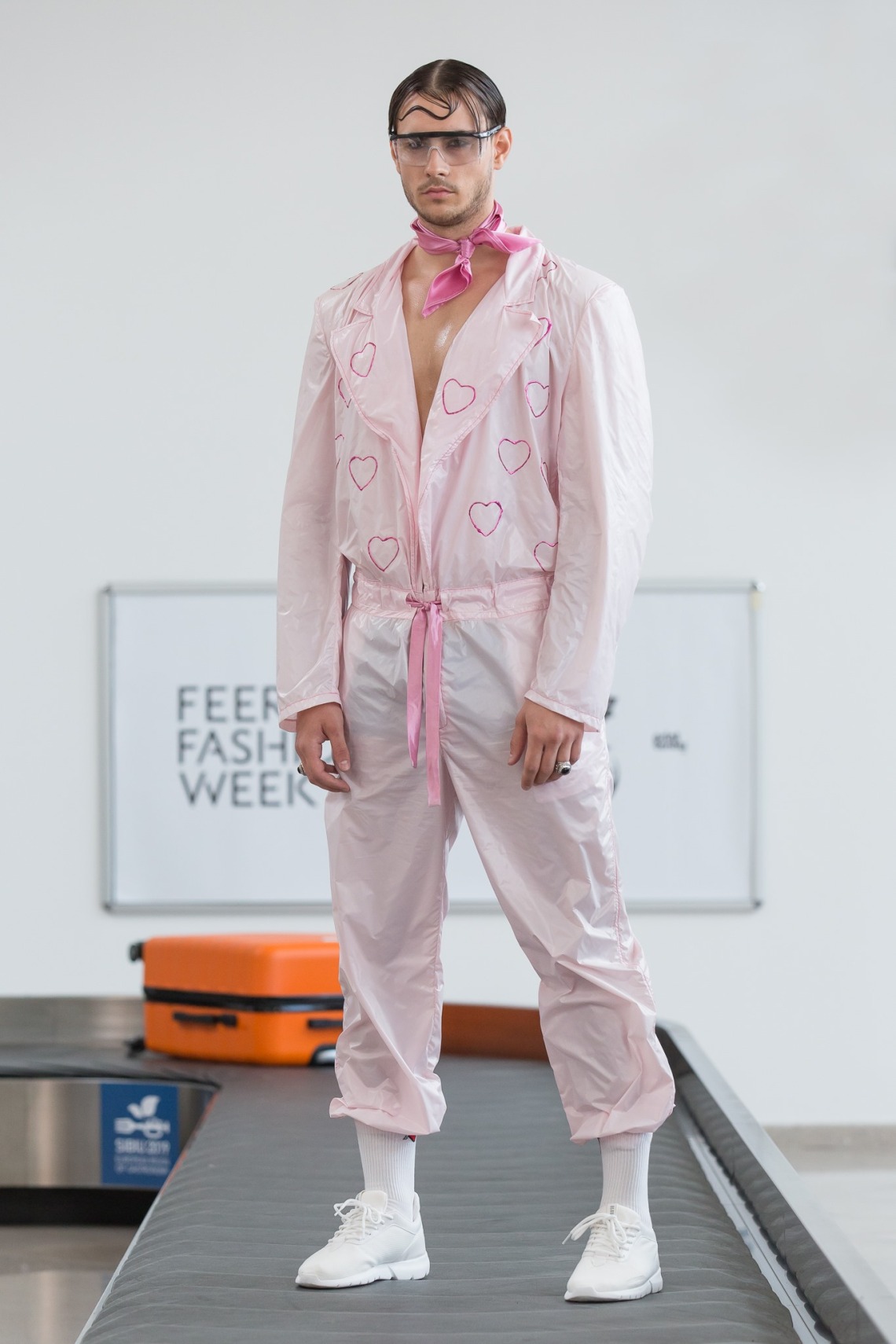 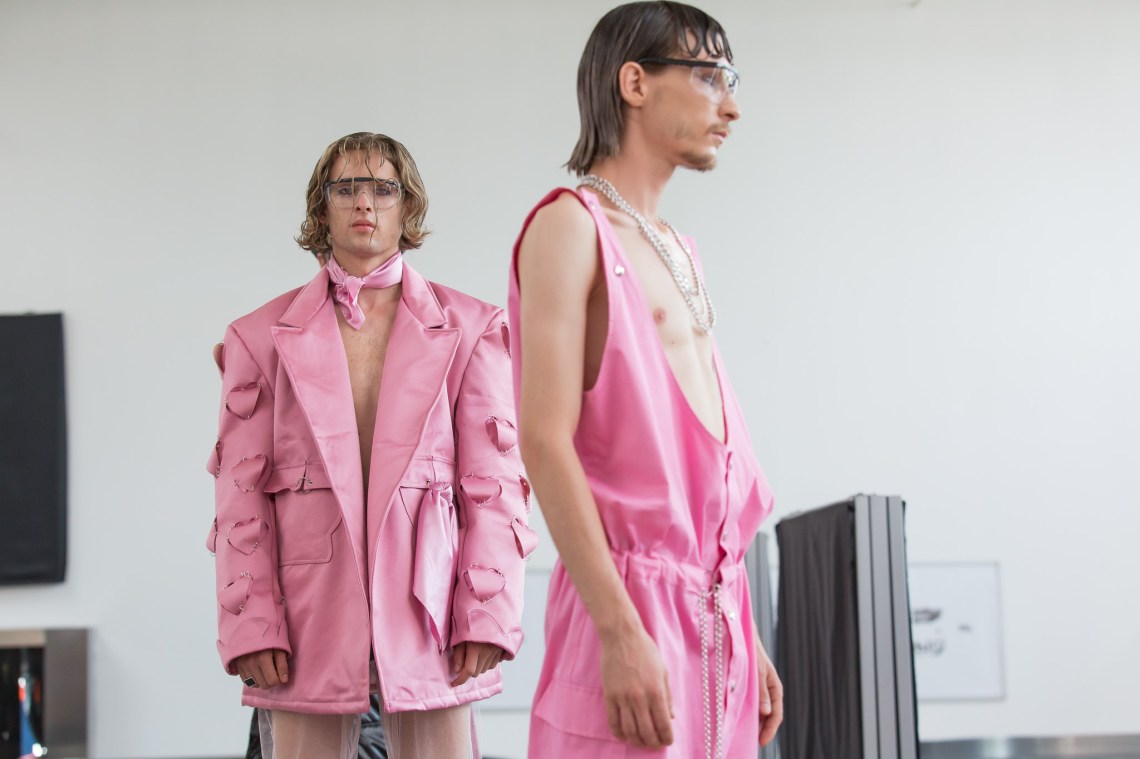 From the airport, presentations moved to Magura Airport in Cisnadie, where they moved in the sky. Among the planes, moto-planes and delta-planes, was showcased the Spring/Summer 2019 collection of Bianca Popp, Blue Giraffe. Bianca Popp, an extraordinary designer from the Feeric Fashion Week in the last 10 years. The collection is about a declaration of freedom, casual and romantic dresses, with white and blue as main colours, said Bianca Popp. 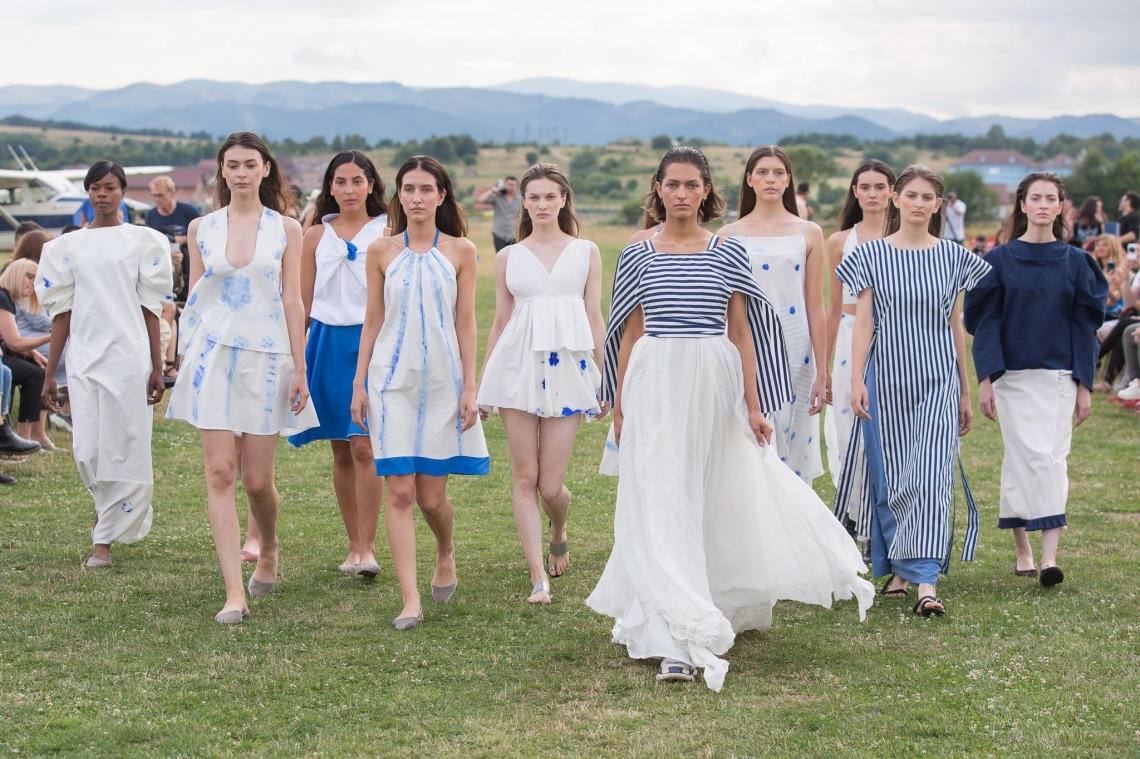 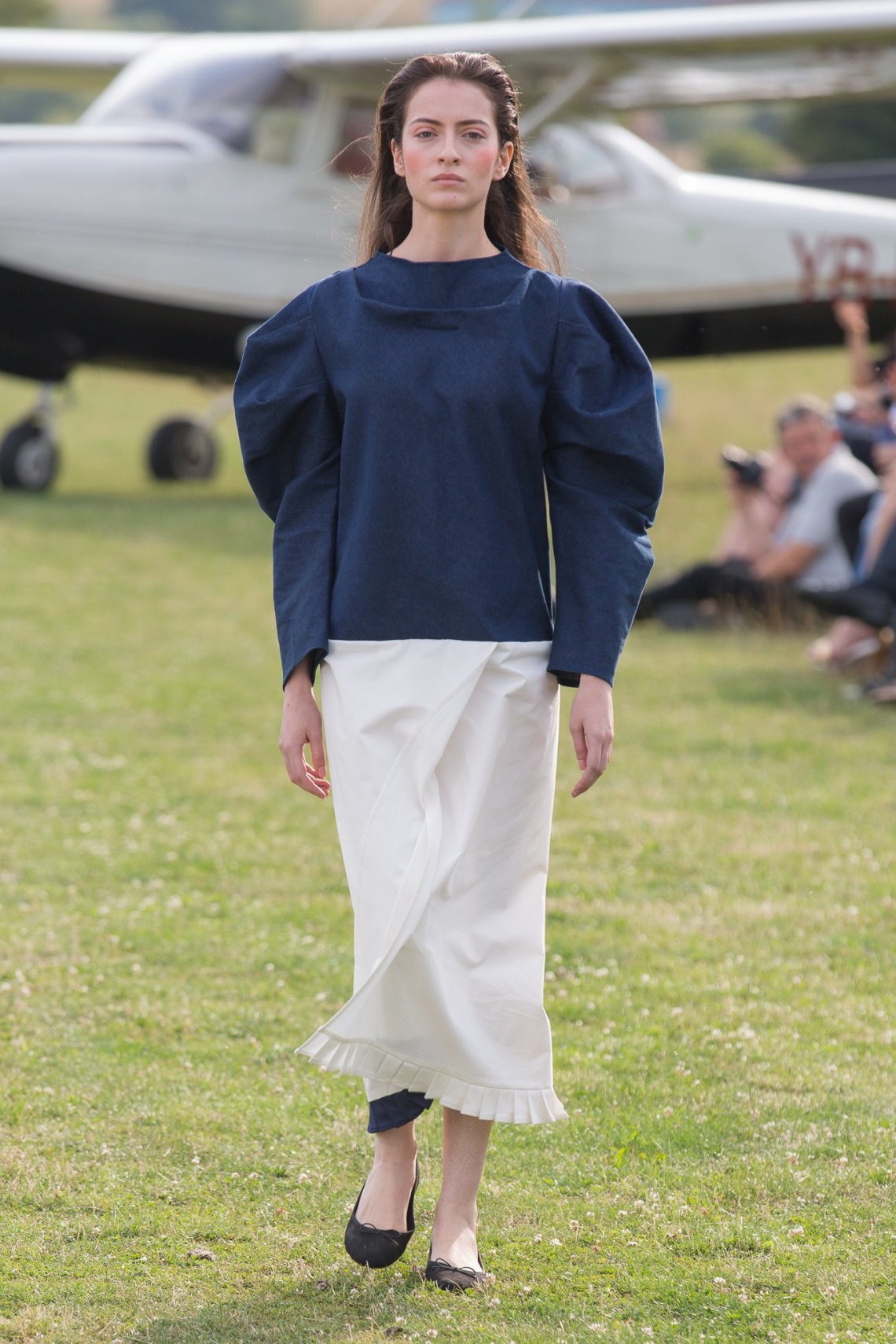 Soon after, Habermann Square put the grate geometry to showcase the Ramelle brand. RAMELLE was born out of an immeasurable passion for fashion and art. Ramona Mihaela, the creator behind the brand, wanted to explore new dimensions with new perspectives, offering creations with a minimalist, feminine design, where fashion meets architecture, and geometric shapes blend perfectly with futuristic accents.  HASEYA collection is about the woman who found herself and created her own world, she knows that all the resources are inside her. 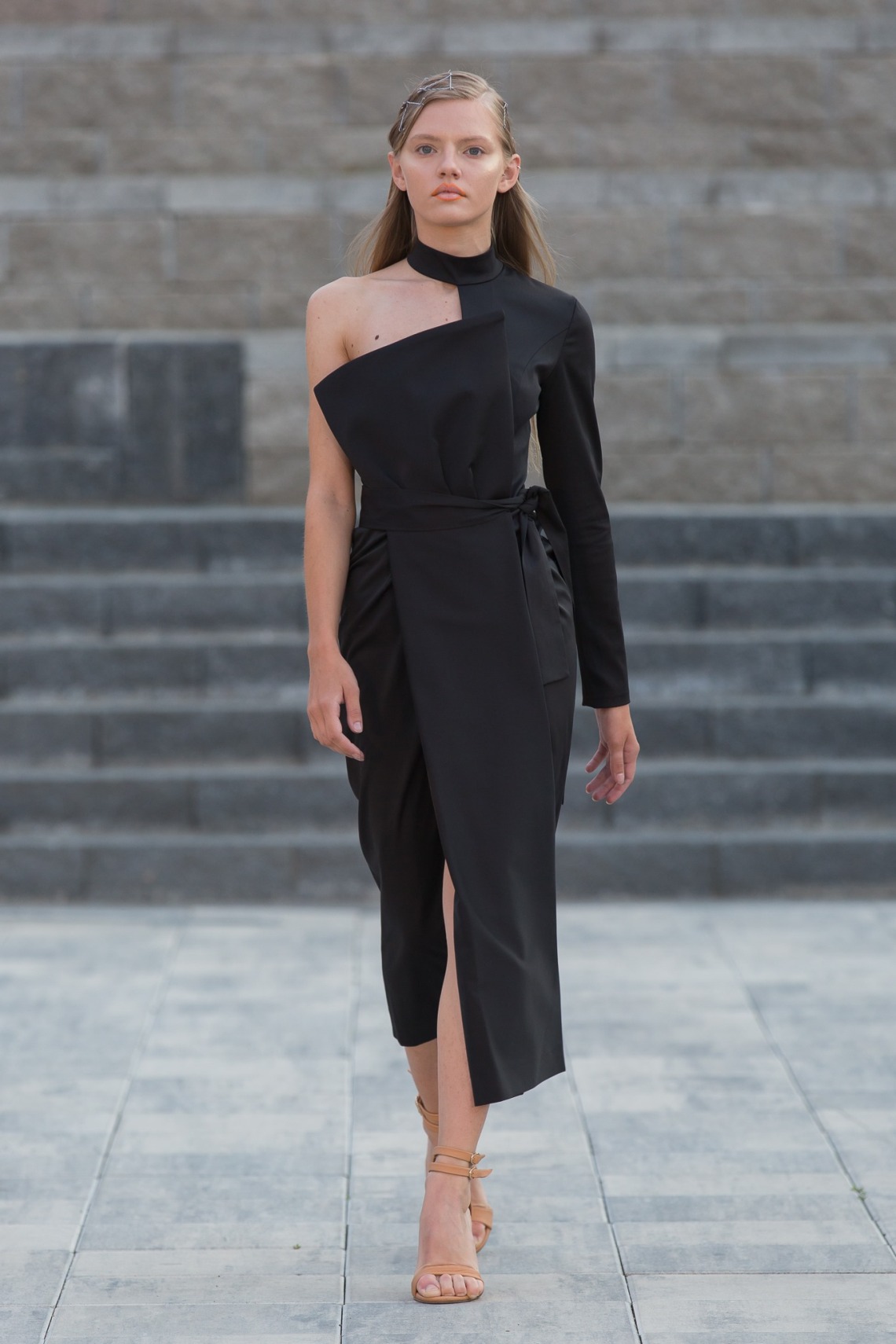 Friday’s day ended at “Ion Besoiu” Cultural Center, where Bianca Popp presented a menswear collection, and IED – Istituto Europeo di Design had a collective presentation. In 2018, the IED started a series of extensive events on sustainability. 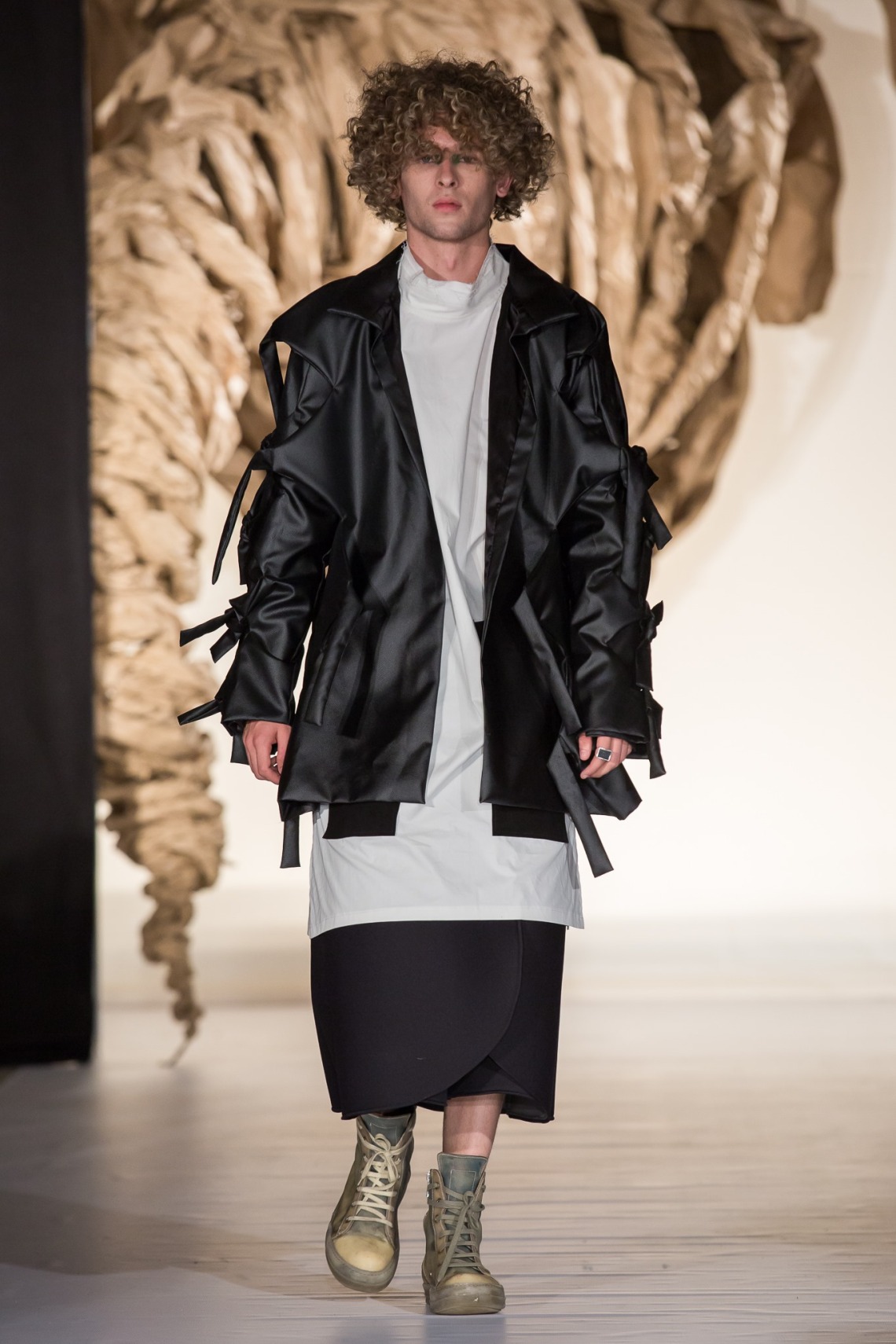 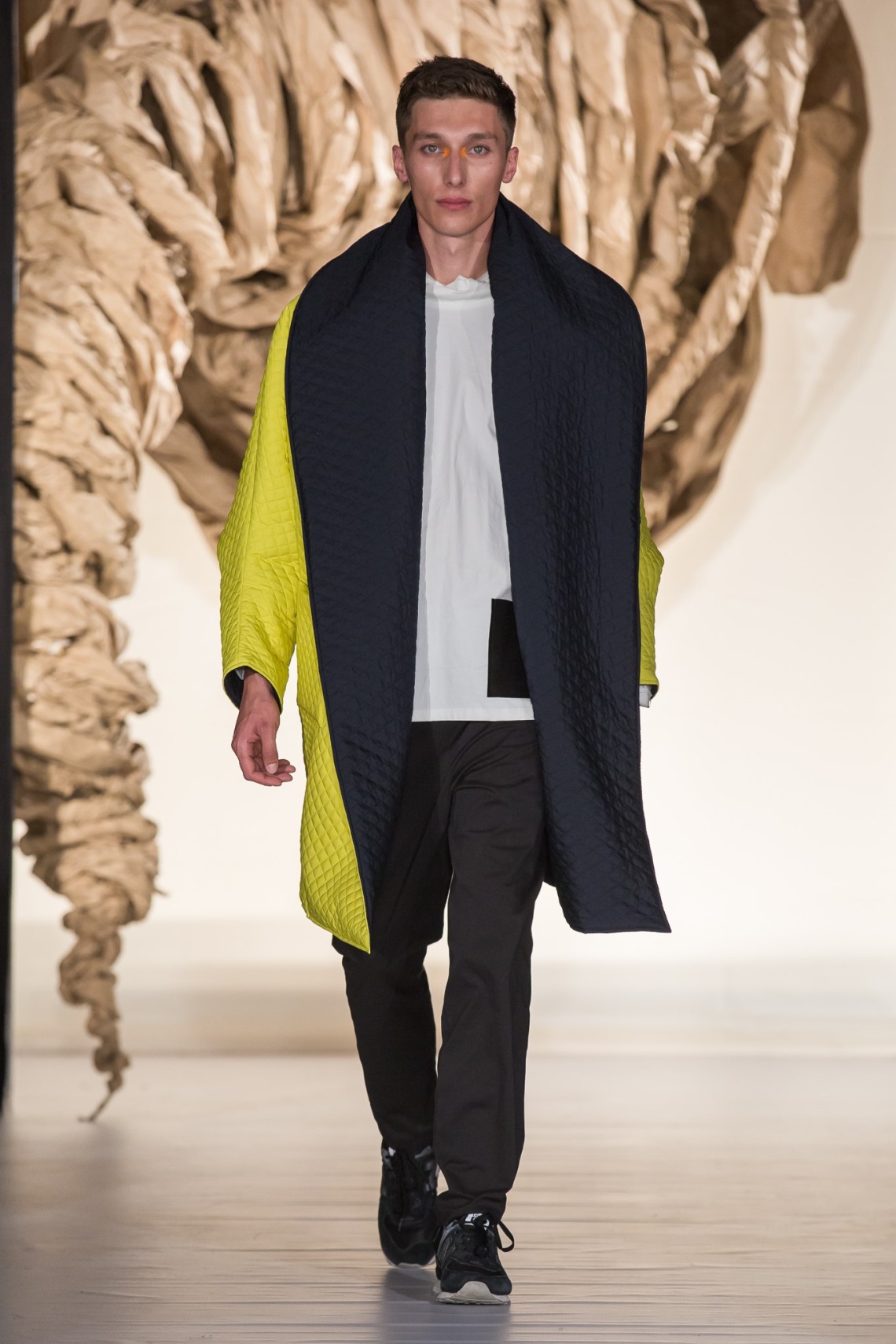 ”We started in 2018 with a series of happenings focused on sustainability, together with IED students and special guests who include Livia Firth – the creator and Creative Director of Eco-Age, a consultancy and marketing brand that supports growth of businesses that generate, implement and communicate sustainability at work – and Tiziano Guardini, the designer who won the GCC Award for Best Emerging Designer, set up by Camera Nazionale della Moda Italiana in collaboration with Eco-Age. The topic of sustainable fashion is not just a fad, but a urgent issue. They inspired IED students, guiding them in the development of their capsule collections: the project was launched in January 2018, at the same time as the last edition of Pitti Immagine, with an ‘inspirational brief’ and a week of meetings dedicated to sustainable fashion in collaboration with also Italian companies chosen for their environmentally-friendly production processes. These included Ecoalf, Thermore, Isko, Texmoda, Lampa, Orange Fiber, Essent’ial, Showmates/Idee Partners, Arti 21, Vegea, Nemanti, Fulgar, Santoni, Spazio 2.0 and Ecopell 2000. The same brands provided the fabrics, raw materials and expertise required for the creation of the prototypes. ”

Parcae is a capsule collection that draws its inspiration from the relationship between nature and technology and from the contemplation of how these two worlds coexist in harmony. As in Ancient Greece aesthetical elements, balance and neatness spreads in 5 looks of exquisite garments with volumes that conquer the space around the body, using drapery, deep creases and a geometric study of weights and volumes.

Oddly Beautiful. In a devastating depiction of a post – modern world destroyed by pollution, eighteen – year – old Jonah has a heartbreaking beauty, a pure spirit in a poisoned body. Through the collection his story unfolds. The clothes he wears, made from sustainable fabrics and perfectly cut, turn out to be contaminated with toxic substances, just like the environment he lives in, which come together in a kaleidoscopic collision of shades and colours, wondrous yet with something of the feral about them. The silhouette is clearly defined, wrapped in fitted trousers and structured jackets.

Puru Puru is an onomatopoeic expression in Japanese used to evoke gelatinous substances of biological word of jellyfish and transitional life forms such as cocoons as they change to caterpillars and thence to butterflies. The 5 looks bring out the versatility of the fabric and the potential of warp and weft. Deconstructed denim and expansive, flowing volumes are accompanied by exquisite needlework, inlays and filaments. Many of the fabrics and yarns used are composed of fibers coming from recovery processes. The organic denim produced by Candiani is treated using Kitotex® Veg Technology, a biodegradable substance extracted from fungi and algae that removes all damaging chemicals from the production process and reduces water and energy consumption, with GOTS (Global Organic Textile Standards) certification. The five looks use soft fabrics, creases and pleats to explore the volumes of men’s clothing. The fabrics move, creating ripples and clear lines. Various textures and weights complete the collection, combining woollen cloth and a light, almost transparent jersey with faux leather and light pleated organza, fabrics produced by among others Texmoda, and Miroglio committed to Detox guideline to eliminate hazardous chemical toxic substances.

Through an expert choice of neutral colours and refined needlework, the Human Trace team describes human beauty, ripples and the textures of our skin, while stitching and tatting leave digital stamps on the fabric.

Divisi. We are constantly divided: divided by time, by school, in sport, by roads and by work. Stemming from the concept that a uniform epitomises division, conferring identity but at the same time depersonalising, this collection revisits the stylistic features of these garments through a series of looks with unexpected volumes, looking to the future, versatility and constant transformation. The garments are made from structured fabrics, with sinuous cuts and sudden inserts. Uniform is turned into embroidery and inlay, but also becomes the very substance of the garment. Jackets, trousers and overalls, like comfortable body armour, offer an element of surprise and create new uses through cuts, long zips and openings. Among the fabrics chosen, the wool produced by Emmetex with recycled material is GRS (Global Recycled Standard) certified. GRS is an international, voluntary, full product standard that sets requirements for third-party certification of recycled content, chain of custody, social and environmental practices and chemical restrictions. 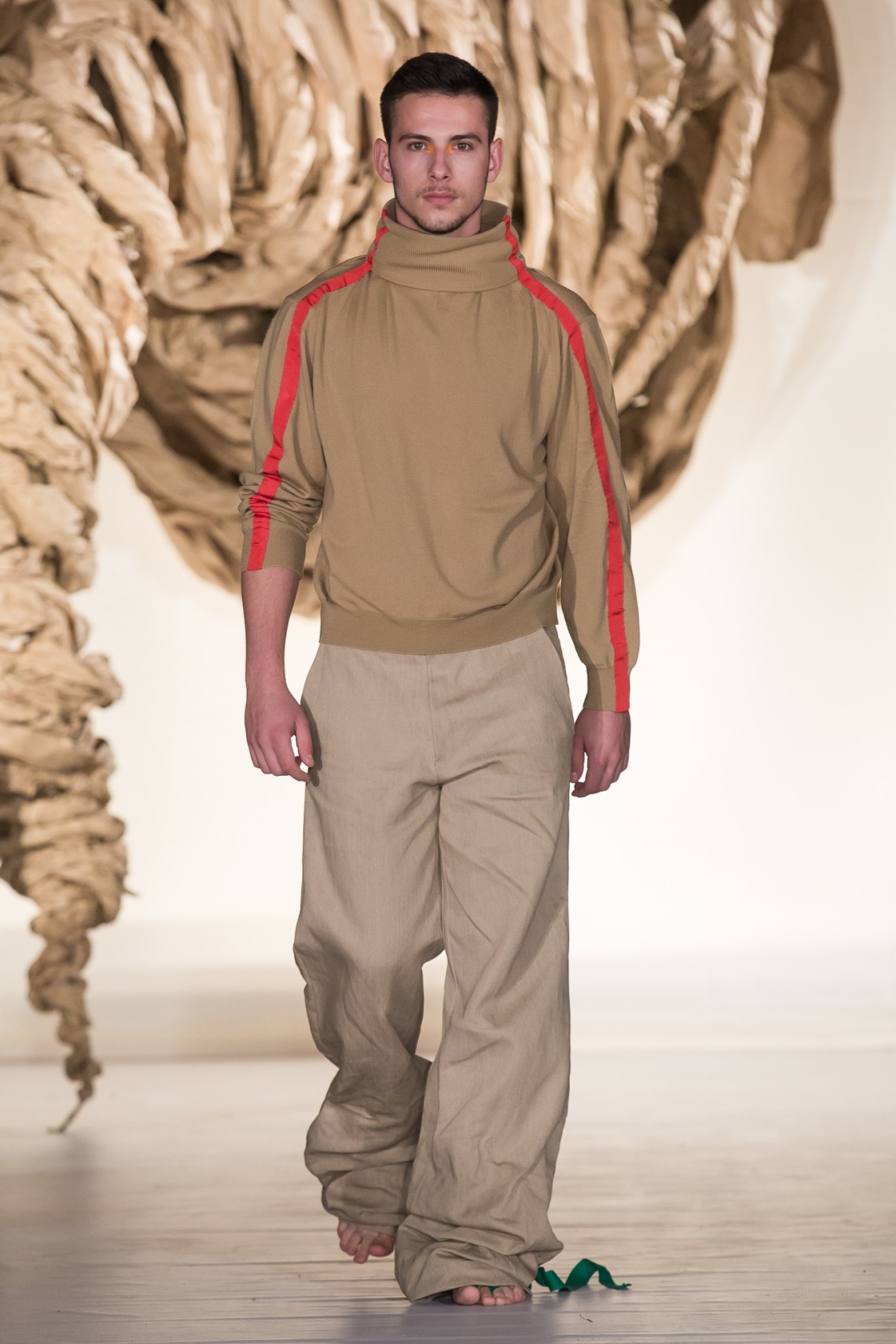 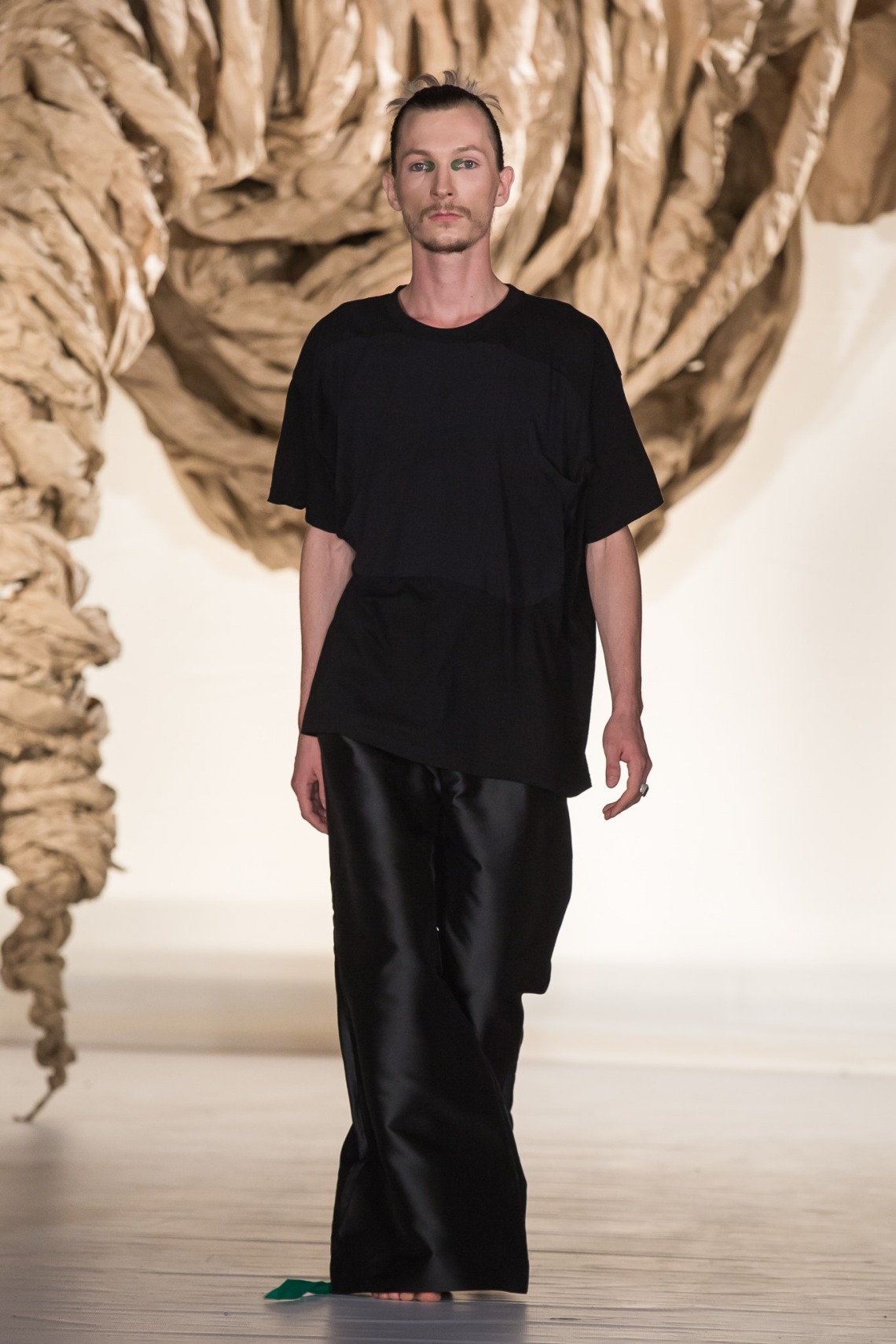 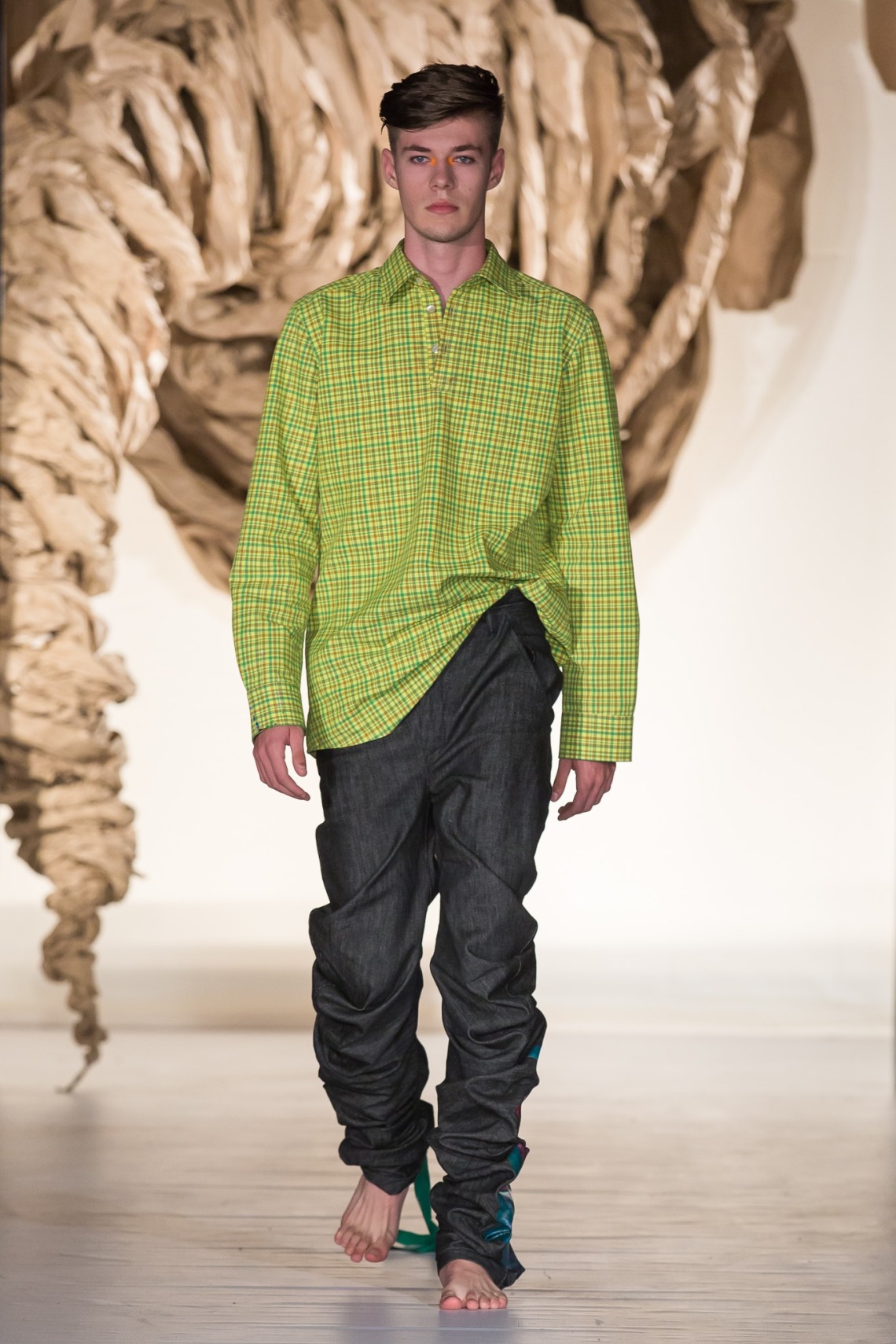 The fashion shows continued at the Cultural Center ”Ion Besoiu” in Sibiu with KALEI‘s collection that represents femininity, strength, the concept of slow fashion and the search for the values of tradition from which contemporary fashion has fallen. KALEI appears for the first time to the world in Feeric Fashion Week of the hand of her young designer Laura Reverte. His collection ‘Aetereum’ is inspired by the shapes and volatility of the celestial bodies, the stars and their magnificence. All magic that permeates the universe materializes in this collection, which seeks to project a reflection as if it were a mirror. The shapes and details of each piece, elaborated by hand, recreate the essence of the woman as if it were the same particle of life; woman and universe are one. 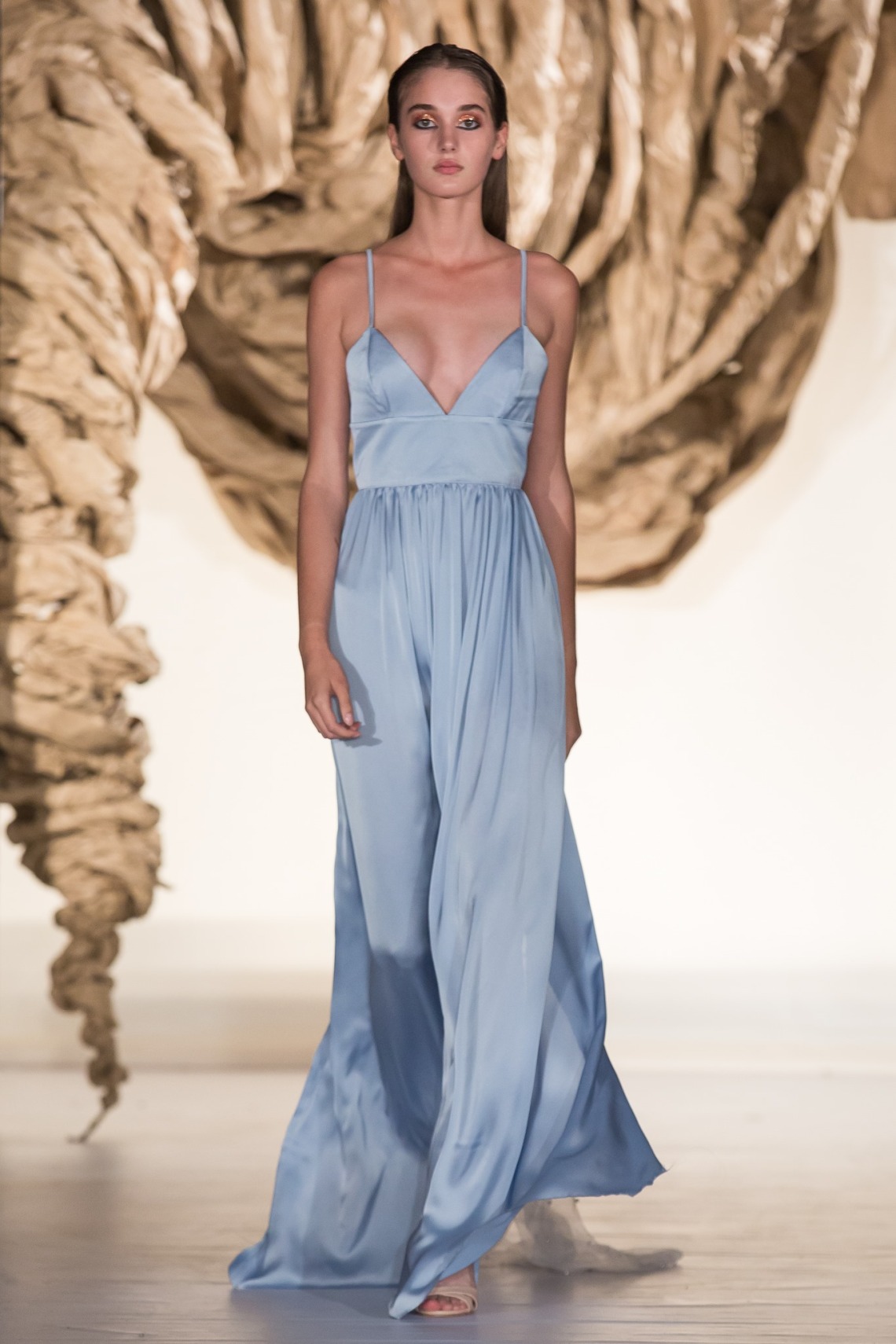 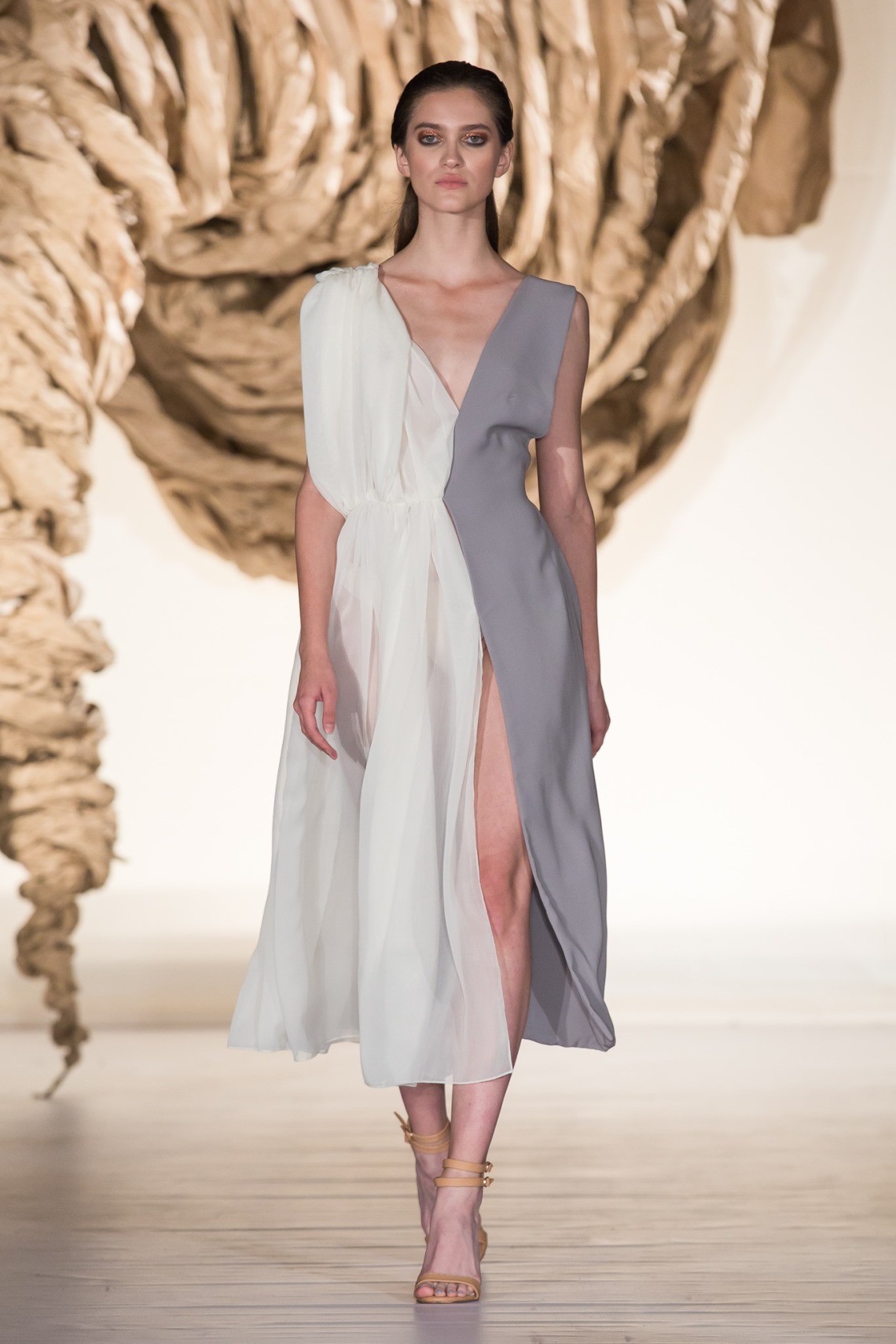 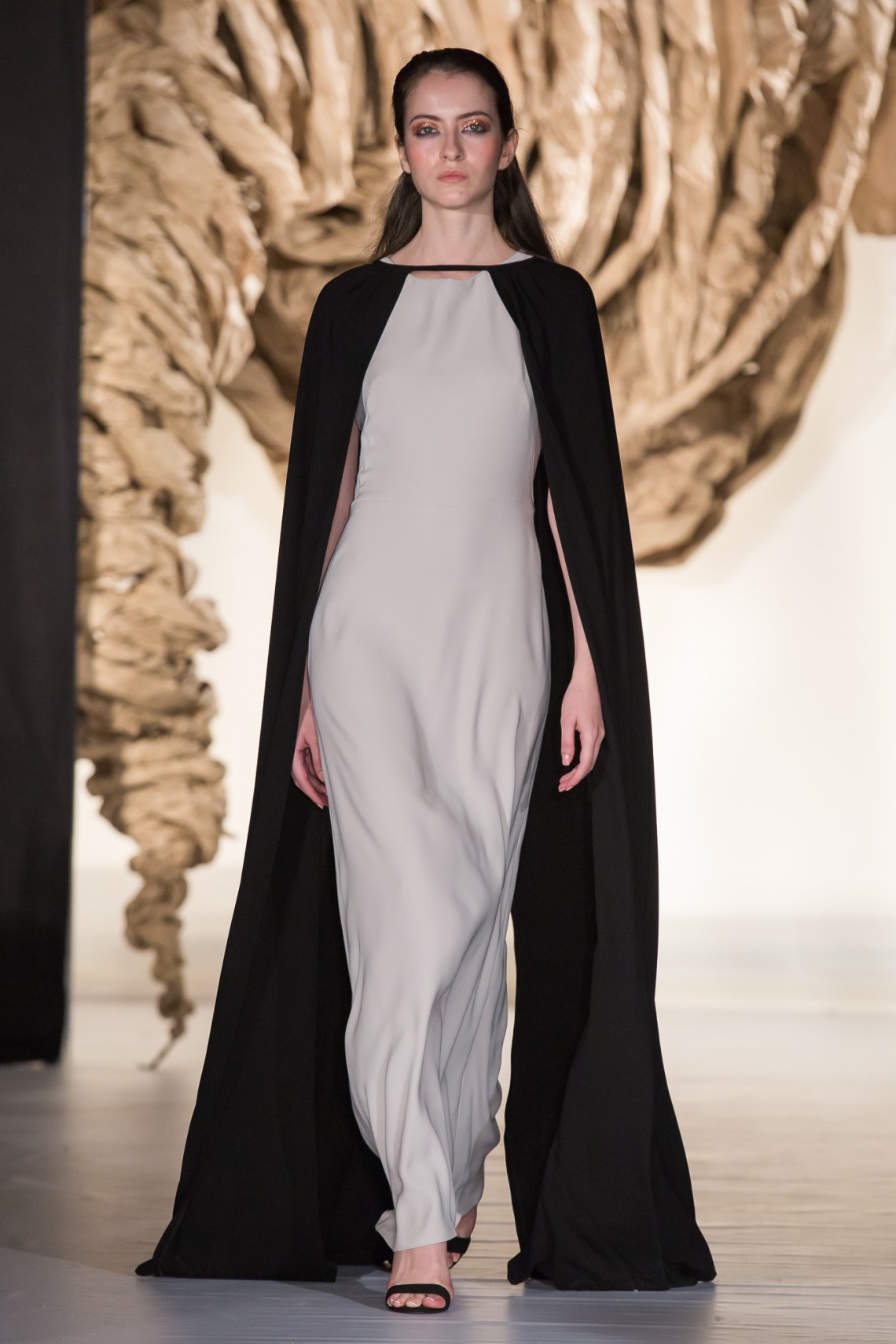 REDESIGN THE FUTURE OF FASHION

The events continued in Sibiu, and in collaboration with Feeric Fashion Week and Vfair, organized a sustainable fashion design competition dedicated exclusively to Romanian young designers.

The prize was a substantial one and consists of a free scholarship in Barcelona for the Diana Daian, the winner of the competition, in collaboration with IED – Istituto Europeo di Design Barcelona, Spain. The ten finalists presented their works for judging the same Friday night.

10 FINALISTS – REDESIGN THE FUTURE OF FASHION 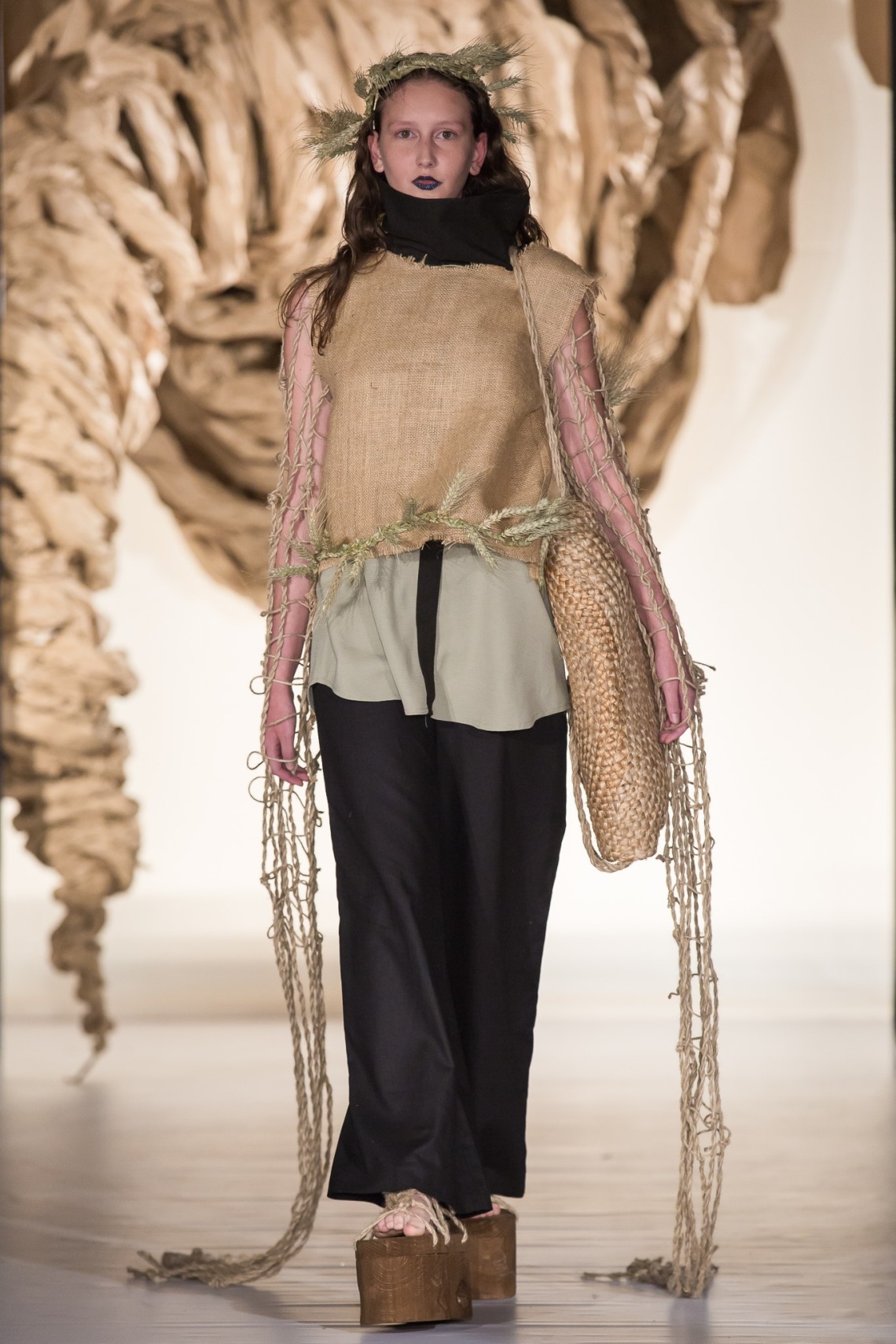 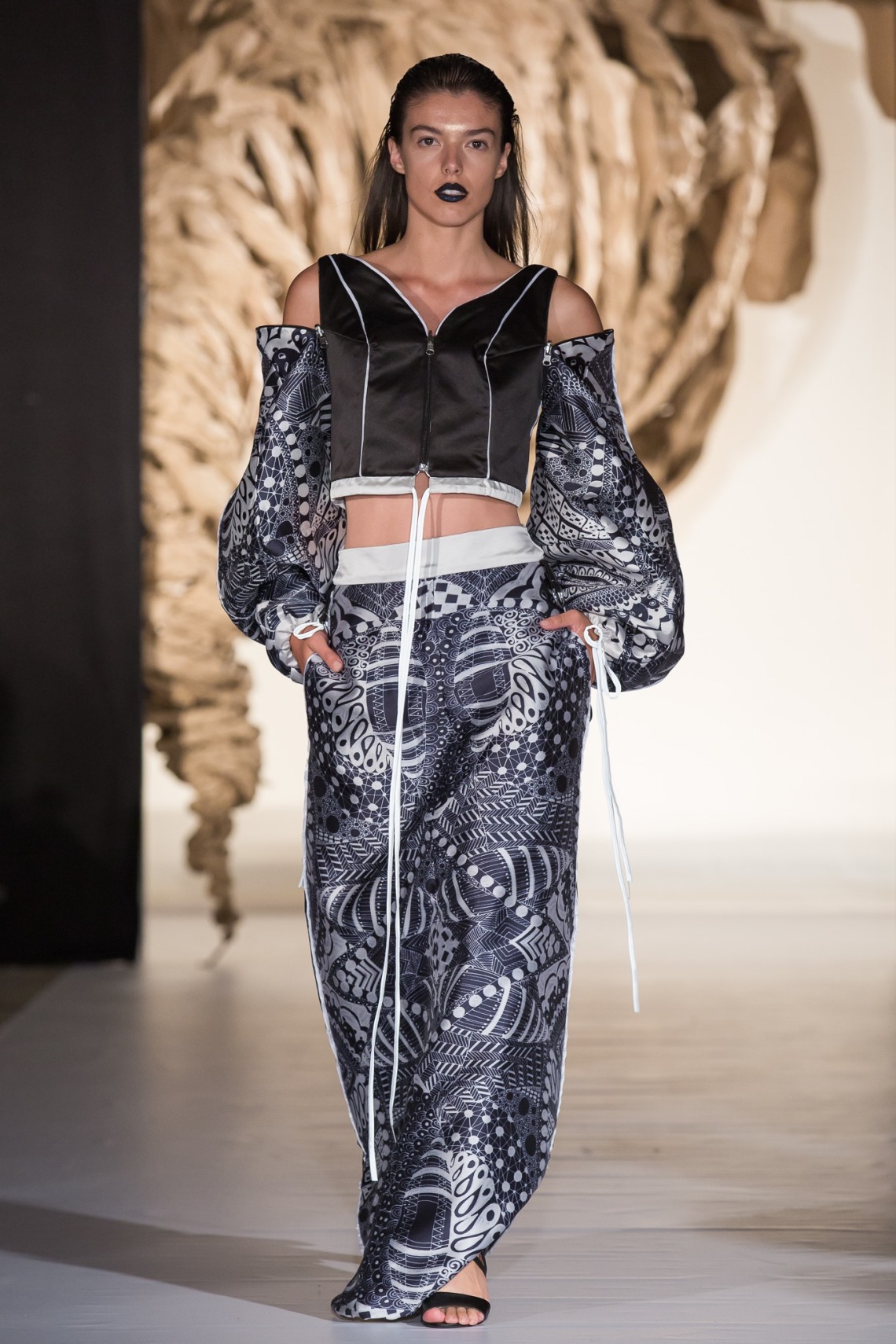 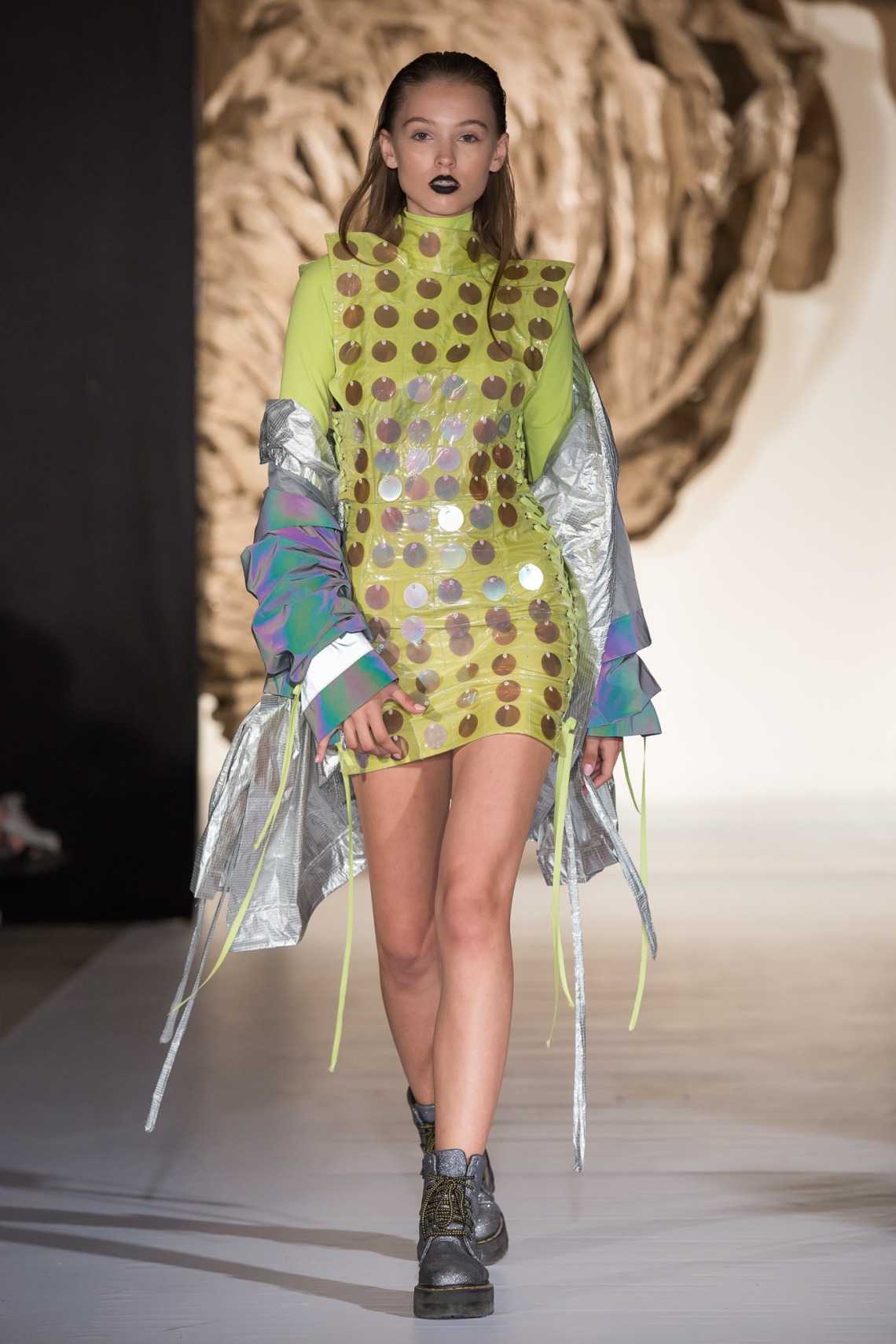 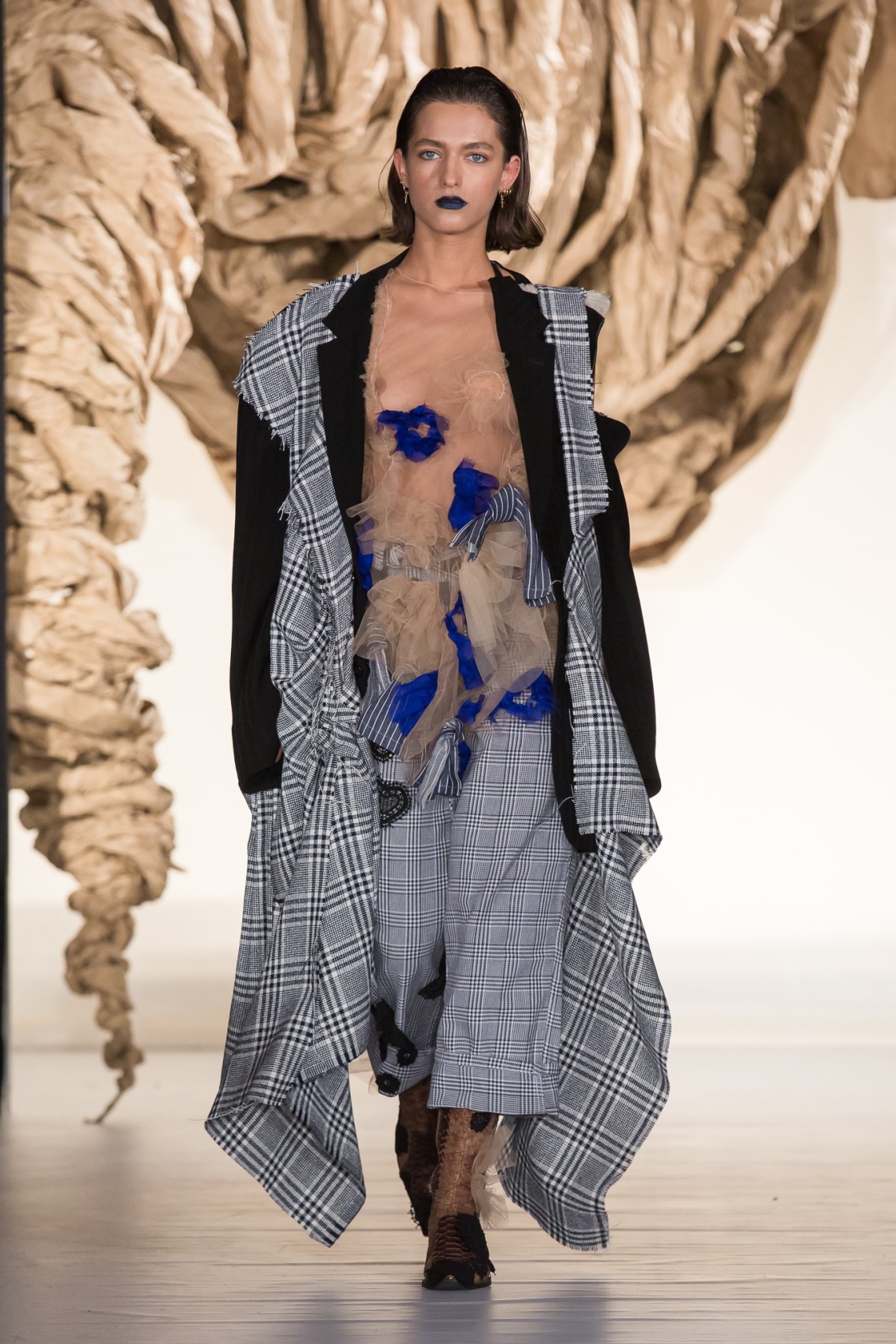 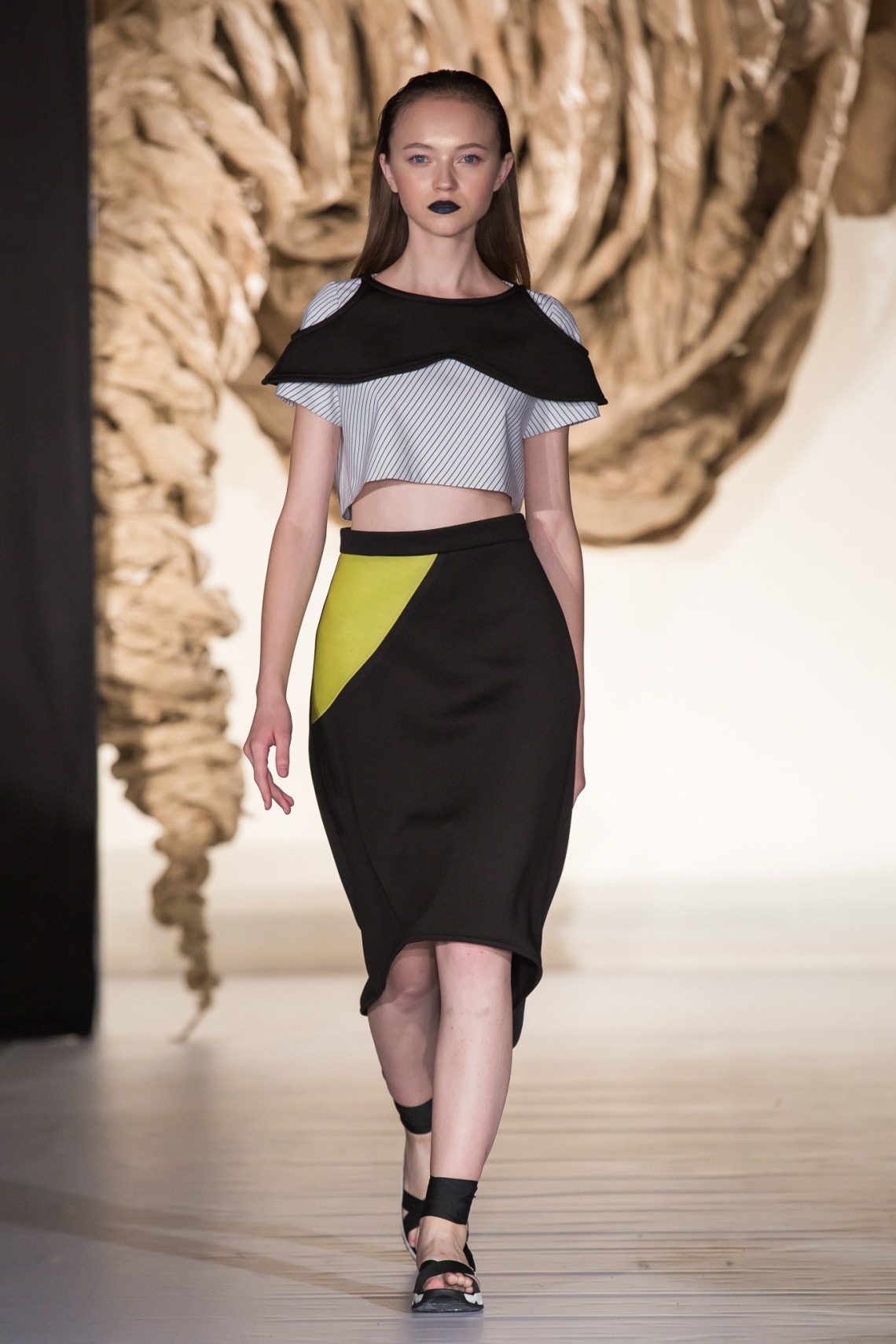 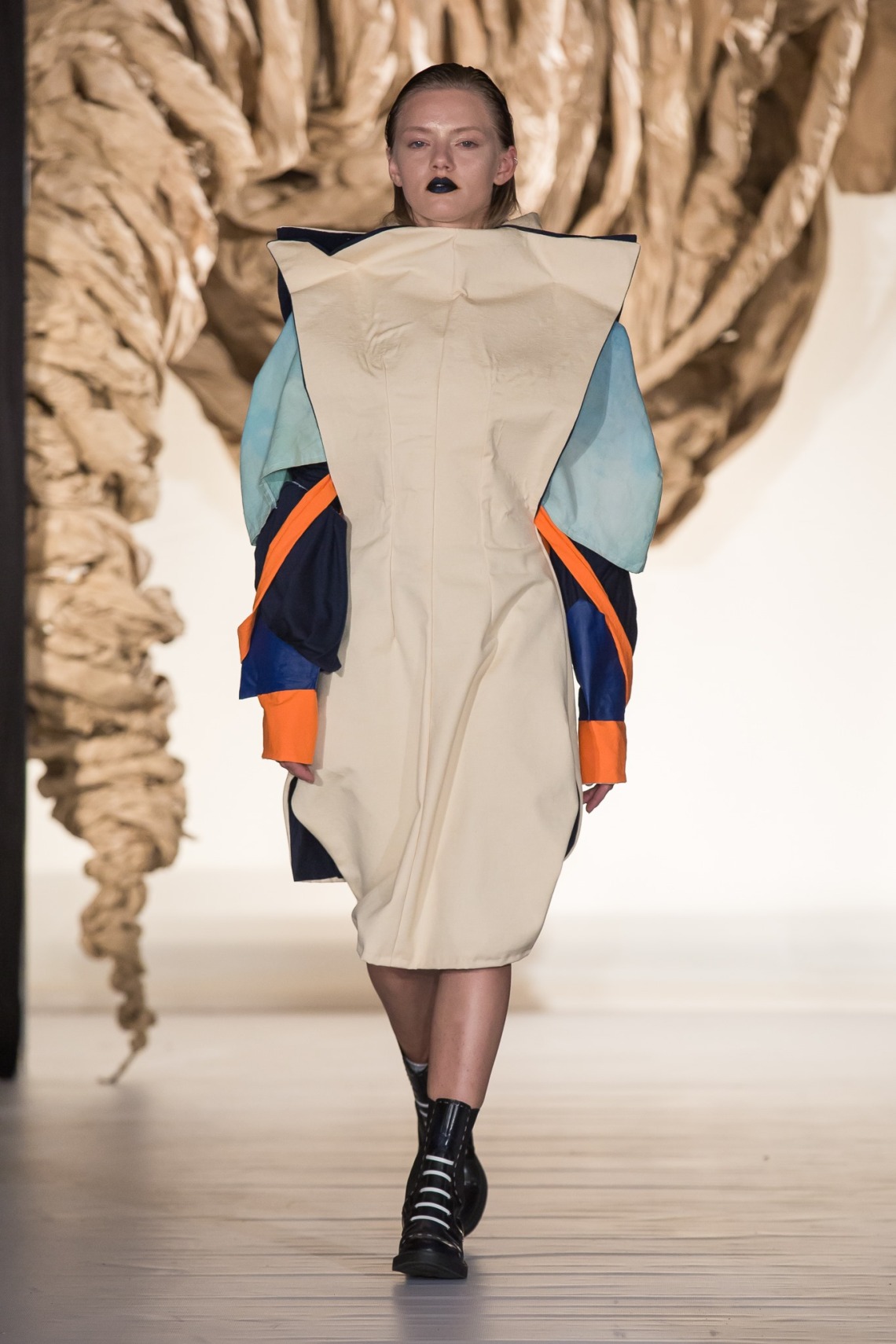 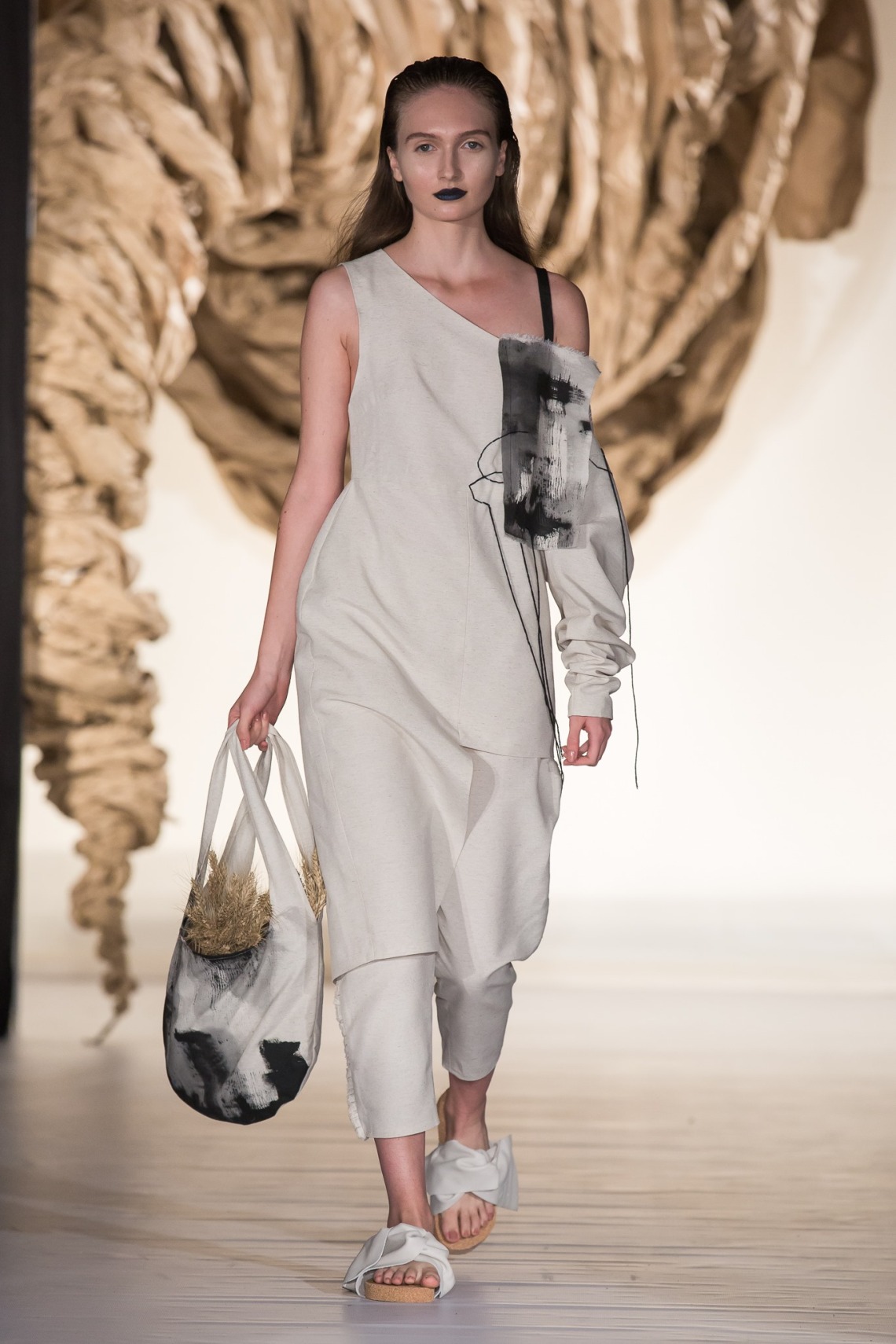 Feeric Fashion Week took place between July 17th and 21st, in Sibiu. The event is co-financed by the Sibiu Local Council through the City Hall of Sibiu and the Sibiu County Council.