From October 7th to 10th, ModaLisboa AND NOW WHAT?, in co-organization with the Municipality of Lisbon occupied , for its 57th edition, two well-known but distinct places in Lisbon: Estufa Fria and Capitólio.

Once more, without imposing a season, they showcased the collections of the Portuguese Fashion Designers, in a four-day event, completed by talks and workshops. As it happened in October 2020, and after an exclusively digital season in March 2021, the Fashion shows had once again an exclusive in-person audience. As well as being streamed on ModaLisboa.pt and in the ModaLisboa apps.

After having the pleasure to join in-person here’s just a small selection of what Portuguese creative’s have to offer:  three names you should remember. One shouldn’t be surprised to see them featured on fashion week schedules in New York, London, Milan or Paris in the very near future. But until then, they are presenting in the awe-inspiring city of Lisbon.

The new talents show is always the one that we, at 33, are looking forward too. It could be described as the time where a designer’s creativity is at its peak. The inevitable yet highly waited on moment in which their point of view is introduced to the world.  “The Sangue Novo contest was always about questions. How does the new generation of Designers interpret the world? What do we have to teach them? What are they teaching us? Is this the design of tomorrow? Is this the solution?” This edition, of Sangue Novo, 10 designers have been selected, these 10 designers for the development of their collections, the ten young designers had the support of three big players in the textile industry: Tintex Textiles, Calvelex/Fabrics4Fashion and Riopele, in a partnership with ModaLisboa – and they have been given mentoring from the panel of judges, since July 30.

Each designer selected by the judges will receive a financial support to create a new collection, which should have between seven and nine looks, to be presented in March 2022. And only then will the big winners of this Sangue Novo Edition be known.

BÉHEN’s SS22 collection, speaks of a female artistic identity in a dictatorship. With the support of Casa do Artista, which works every day for the deep recognition of professionals in the Arts, this spring collection originated from the tales about what it was like to live under Salazar, taking the audience on a visual and auditory odyssey through the history of Portugal. Completely embracing the notion that fashion can be one of the best ways in understanding the past or the time one is living in.

The brand brought forth a collection that embodies the designer’s perspective and beliefs: ”it is about the revolution in every day. A metalanguage of transformation, which needs to be expanded and shouted out while equality remains an utopia. There is hope in the power and firmness of these testimonies, and it is in this clarity of being that our tomorrow must lie”

Constança Entrudo was the winner of the Who’s Next Prize last September in Lille, France.

For SS22, Constança Entrudo invited us to a presentation exploring the relationship between written word and visual form. In this collection, Constança has developed a new and site-specific multimedia installation comprising of five elements: textiles, performance, sound, sculpture and visual poetry. For the presentetation she took an immersive route, transporting her guests not only in her story but in her colorful and carefully crafted universe. The result being a deeply personal collection, in which visual poems written in collaboration with artist Isabella Toledo appear through these themes of fragmentation and distortion and hand-woven fabrics coming apart interact with the set design in a playful and mirage like experience.

During SS22 at Paris Fashion Week, Constança Entrudo, presented her summer collection in the heart of Marais. Constança , in an authentic manner, continued her symbiosis with the plastics arts in a multimedia installation that combined textiles with performance, sound, sculpture, and visual poetry to explore the relationship between the visual medium and the written word.

For SS22, Filipe Augosto, showcased his collection entitled “VIAGENS NA MINHA TERRA” which arose for his memories of the village he was born in. “in which he had the opportunity to see a set of memories of the land and its traditions through a photographic exhibition”.

If one was in this particular village or not doesn’t change the fact that with each look that appeared on the runway, you could feel the pulse of the village becoming more familiar. Through his personal approach he seamlessly succeeded in both showcasing his roots as well as engaging the viewer by generating a nostalgic individual memory of each person’s own “village”. Delicate fabrics, flowed on the catwalk maintaining a genderless approach to his creations, parading what once was or what is about to come.

Luis Carvalho’s SS22 collection entitled “RIDE”, presents a refreshingly lighthearted mix of looks. “It’s time to go out, to breathe. It’s time to be free again!” A fabric and color based commute between the city and countryside. Smoothly reintroducing through his creative vision and understanding of the zeitgeist the 50’s silhouette into the contemporary setting.

Kolovrat’s SS22 collection is a playful take on traditional clothing that is familiar to all of us. Through breaking these traditional elements down and rebuilding them the brand achieved a new composition that politely pays tribute to what it once was but feels new to the eye. The show in itself had a much needed effortlessness about it, a diverse casting as well as a varied approach in showing off the clothes, with some of the models roller-skating up and down the runway. 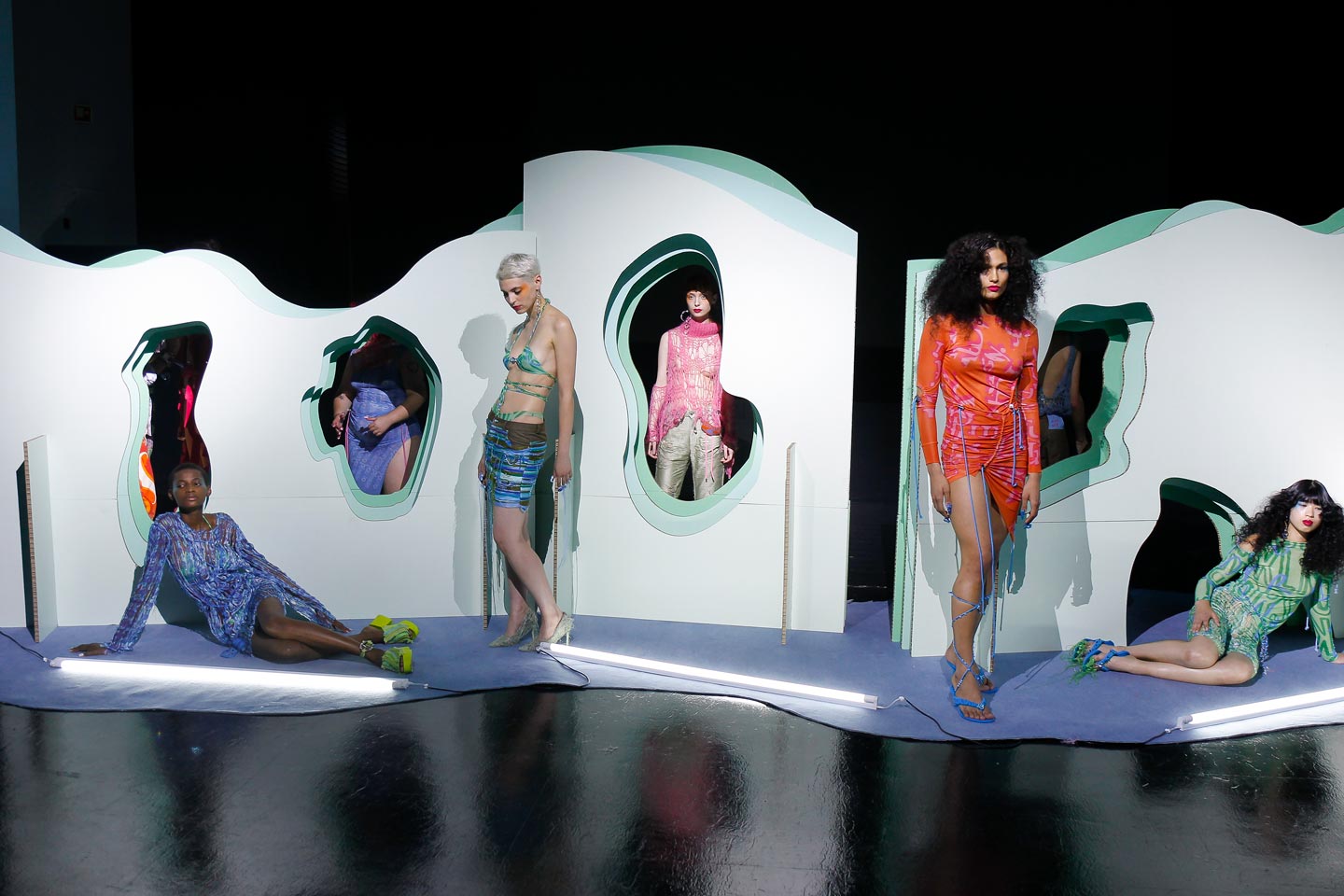